It’s Zuma vs the SACP... and it could get messy 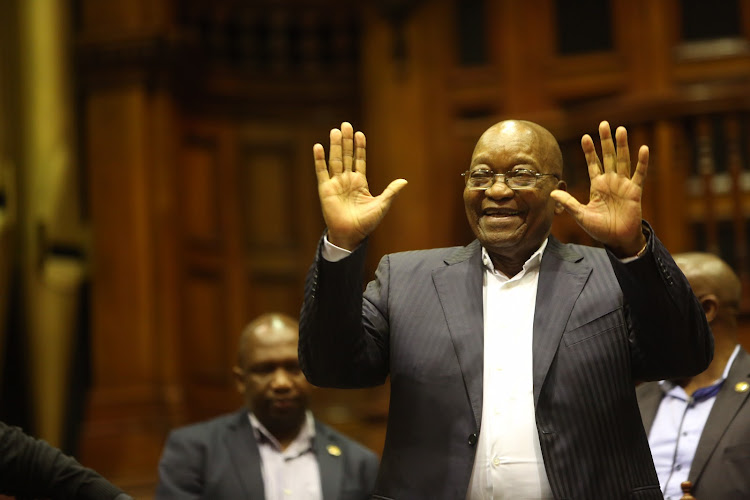 Zuma addressed a Congress of South African Students (Cosas) event in Durban on Wednesday - and took the stage to call on his detractors to stop provoking him‚ saying he has been keeping quiet at the party’s criticism of him but now that he was no longer president he can handle them.

Although Zuma did not mention the SACP by name‚ it was clear that he was referring to the party’s accusation that he was at the centre of counter-revolutionary forces who are fighting back against corruption measures.

Shortly after he had addressed the Congress of South African Students over free education in Durban on Wednesday‚ Zuma surprised many when he grabbed the microphone again and said: “They must not provoke me. I just want to give that warning. I’ve been keeping quiet all the time. Instead of discussing their own programmes‚ their own policies‚ they sit in their leadership to discuss me. I am warning them: don’t continue doing it. I am now not a president where I have to be very careful how to handle things. I can handle them the way I want.”

After the SACP’s three-day central committee meeting‚ which ended in Johannesburg on Sunday‚ the organisation’s general-secretary Blade Nzimande accused Zuma of being at “the heart” of this fightback campaign.

“In many ways‚ former president Zuma is at the heart of this fightback‚ together with a group of discredited individuals‚” said Nzimande.

His comment came in response to talks of the formation of a new political party in KwaZulu-Natal by the former president’s supporters.

Nzimande said a lot has been done to dismantle the “parasitic looting of public resources” during the Zuma era‚ but condemned what he called a fightback from Zuma’s allies.

Former president Jacob Zuma used a Youth Month event in Durban to lash out at his critics within the ANC‚ telling them to simply shut up‚ quit ...
Politics
3 years ago

The SACP leader said it was not enough for Zuma to say he won’t leave the ANC.

“Comrade JZ must distance himself far from that. It’s not enough for him to say what I was taught by the ANC‚ I’ll never leave the ANC‚” Nzimande said.

Zuma told a prayer gathering to welcome him back home in Nkandla on last week Thursday that those who thought he would leave the ANC clearly did not understand him and vowed that he would remain a loyal member of the ruling party.

“As the youth league we continue to be worried about the attack that is directed to you now as a person. You have been attacked while still leading the ANC‚ but you continue to be attacked even when you are enjoying pension‚” he said.

Mshengu said the ANCYL was worried by the posture of the SACP‚ which “is supposed to be the vanguard of the working class but which has assumed the role of becoming nothing else but persecutors of president Zuma”.

“And we are calling all the real communists to stand up because the Communist Party should be helping us to chart the direction of the country ideologically and giving clarity to the meaning of our freedom. It is not the role of the communist party to spend three days discussing president Zuma and then call a media briefing to tell the nation that the still hate president Zuma‚” he said.

He said the youth league will take Zuma to all their ANC campaigns as they were happy that he was the first former president who is still active even in retirement.

“The question we have asked and which has not been answered is what more president Zuma must do to indicate that he is still a loyal member of the ANC‚” said Mshengu.

I’m not afraid of being convicted: Zuma

Former president Jacob Zuma says he is not afraid of being convicted of corruption‚ saying that judges sometimes convict people wrongly.
Politics
3 years ago

Despite former president Jacob Zuma’s door-to-door campaign in Ward 7 of the Nkandla local municipality on Tuesday‚ the ANC lost to the Inkatha ...
Politics
3 years ago