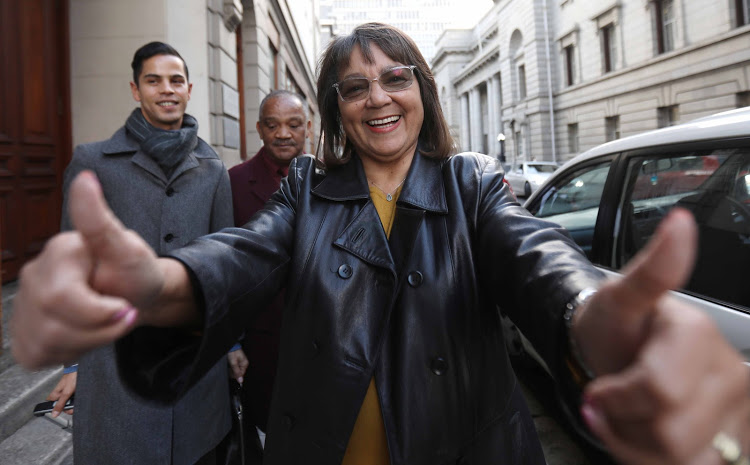 Cape Town Mayor Patricia de Lille celebrates outside the Cape Town High Court on Wednesday after her victory against her own party.
Image: ESA ALEXANDER/SUNDAY TIMES

If you thought the mudslinging in the DA might stop – or even slow down – after a court restored Patricia de Lille’s party membership‚ you couldn’t have been more wrong. Not only has the mudslinging continued‚ it’s done so very‚ very publicly.

The Cape Town mayor backed down not one iota in a scathing open letter published on Thursday – a letter in which she ripped into DA Federal Council deputy chairperson Natasha Mazzone.

At the very start of the letter she labelled Mazzone “the latest appointed scripted spokesperson tasked with smearing my name on the DA’s behalf” – a comment that set the tone for what was to come.

“Like all previous scripted spokespersons‚ my advice to you is to read and understand your script‚ before you so eagerly do interviews. You would be wise to heed my advice‚” she said.

Mazzone hit back‚ saying she believed De Lille’s modus operandi of lashing out‚ bullying and intimidating those who “speak up against [her] actions” was what led to her caucus losing confidence in her.

“I wish to point out that I represent the party not as a spokesperson‚ but rather as one of the deputy chairpersons of the federal council‚” she said on Thursday evening in a media statement sent to Times Select.

Patricia de Lille has been vindicated by the Western Cape High Court after two days of argument. NOTE: Bonginkosi Madikizela is the Western Cape leader of the DA, not the leader as mentioned in name strap on video.