Former US president Barack Obama says there has been a reversal of the gains of freedom and democracy that swept the globe at the time former president Nelson Mandela was freed from prison and the Berlin Wall came crashing down.

Delivering the Nelson Mandela Annual Lecture at the Wanderers Stadium in Johannesburg‚ Obama said the democratic and economic gains that were achieved in the years that followed Mandela release from prison in 1990 were slowly being erased by authoritarian regimes that do not respect human rights and by global corporates that put profits before people.

“An entire generation has grown up in a world that has got steadily freer‚ wealthier‚ less violent and more tolerant during the course of their lives. It should make us hopeful‚ but if we can’t deny the real strides our world has made since that moment when Madiba took steps out of confinement‚ we have to recognise ways in which the international order has fallen short of its promises‚” he told a crowd of 15‚000 people who came to hear him speak.

“Because of the failure of governments‚ powerful elites‚ we now see much of the world return to an older‚ more dangerous‚ more brutal way of doing business." 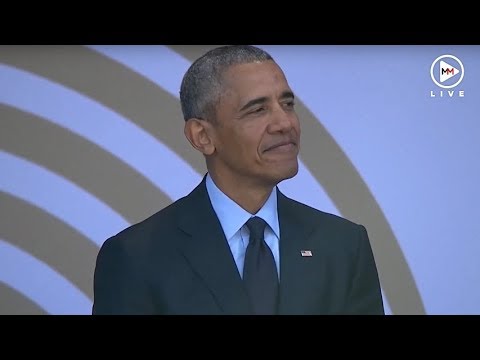 Obama warned that countries and governments that advance nationalism and xenophobia instead of opening their borders to genuine migration and globalisation were doomed to failure.

“Countries that rely on nationalism‚ xenophobia and racial superiority - those countries find themselves consumed by civil war or external war. Technology cannot be put back in a bottle. We are stuck with the fact that we live closer together and populations are moving‚” he said.

“The only way to address climate change‚ mass migration‚ pandemic disease is to develop more international cooperation‚ not less."

The former US president was welcomed by chants of “yes we can” as he took to the podium‚ a reference to the slogan that swept him to the White House back in 2008.