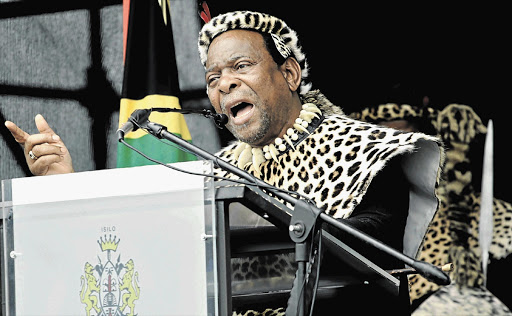 The South African Communist Party has broken ranks with its alliance partner the ANC on the contentious issue of land under the custodian of traditional leaders‚ calling for the dissolution of the Ingonyama Trust‚ whose sole trustee is Zulu King Goodwill Zwelithini.

At a media briefing convened by the SACP Johannes Nkosi District in Durban on Tuesday‚ the party said it stood firm on its decision that the Ingonyama Trust must be scrapped and replaced by a more democratic communal land ownership pattern.

The SACP’s Phumlani Mthembu said their call came because of a number of reported cases of corruption and dissatisfaction among the people living on land under the trust’s control and because of the trust’s failure to benefit those people.

An unfinished reed dance venue initiated by King Goodwill Zwelithini that has been plagued by cost overruns will end up with a price tag of ...
News
3 years ago

“There are a number of reported cases of corruption and dissatisfaction among the people living on the land under the Ingonyama Trust with Permissions To Occupy certificates‚ with no security as they can be evicted unjustly in the name of Ingonyama.

“The majority of the people who are supposed to be beneficiaries of the trust funds benefit very little‚ if any‚ on the service from the funds of the Ingonyama Trust. We believe the king has the generosity to reason with the Ingonyama Trust Board and KZN Premier and heed the plight of the land hungry people who want to work and live on the land‚” said Mthembu.

Both the SACP and ANC will be making a submission to the public hearings on the hearings on whether Section 25 of the Constitution should be amended to allow the state to expropriate land without compensation.

The KwaZulu-Natal leg of the public hearings will begin on Wednesday until Saturday.

An unfinished reed dance venue initiated by King Goodwill Zwelithini that has been plagued by cost overruns will end up with a price tag of ...
News
3 years ago

However‚ the ANC in the province on Tuesday reiterated its position that expropriation of land without compensation was not targeting the 13% of land under the control of traditional leaders‚ including the Ingonyama Trust.

ANC provincial task team coordinator Sihle Zikalala told a media briefing in Durban that the party would continue to engage with traditional leaders‚ including King Zwelithini‚ in an effort to achieve consensus on “best modalities to address this emotive issue of land redistribution”.

His sentiments were echoed by ANC provincial task team convenor Mike Mabuyakhulu‚ who said while the ANC is advocating for the expropriation of land without compensation‚ the land under amakhosi - which is part of the 13% - cannot be expropriated.

“We cannot expropriate what is already within the purview of the state. So this matter should not be confused with the issue of the amendment of Section 25 where we are focussing on the 87% of the land‚” said Mabuyakhulu.

Don’t take away the Zulu king’s land‚ just make him give it to his subjects: Lekota

The ANC government must not take land away from King Goodwill Zwelithini‚ but it must instead allow him to pass it on to individuals in his nation.
Politics
3 years ago

He said only the issue of rural tenure rights can be dealt with and not expropriation as far as land under the control of traditional is concerned.

“That is the matter that will come down the line but for now our focus is on the amendment of Section 25 of the Constitution.” President Cyril Ramaphosa‚ who recently assured King Zwelithini that the ANC government has no intention of expropriating land under the control of the Ingonyama Trust‚ is expected to hold another round of negotiations with the Zulu monarch and other traditional leaders‚ where the issue of rural tenor rights is expected to take centre stage.