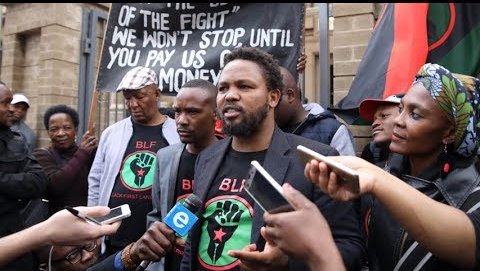 Black First Land First leader Andile Mngxitama has accused the SAHRC of supporting “white interests” and of being part of a conspiracy to block it from participating in the 2019 national elections.
Image: Supplied. File photo

Black First Land First (BLF) has taken a massive swipe at the South African Human Rights Commission (SAHRC) in its Equality Court battle against a woman‚ represented by the commission‚ who has laid a complaint against the organisation and accused the BLF’s leadership of hate speech and inciting violence.

The BLF has accused the SAHRC of supporting “white interests” and of being part of a conspiracy to block it from participating in the 2019 national elections.

“It must be pointed out that the first respondent has to date lodged a number of complaints with the SAHRC relating to racism against various individuals‚ including Penny Sparrow‚ Helen Zille‚ FW De Klerk and Adrian Vlok‚” the group’s president Andile Mngxitama said in papers it filed to the court.

“The SAHRC did not in these circumstances indicate any intention to legally represent the first respondent [BLF] or to facilitate the institution of the proceedings in terms of section 20(1)(d) and or (f) of the Equality Act‚ notwithstanding the fact that there has been evidence‚” said Mngxitama.

He said BLF had tried to resolve the complaints against them with the SAHRC outside of court‚ but the commission refused to meet with them.

Lucy Strydom‚ the woman who had brought the case against the BLF’s leadership‚ had wanted the Equality Court to order the Independent Electoral Commission (IEC) to review the organisation’s eligibility for registration as a political party.

The Black First Land First (BLF) party was hauled to the Equality Court on Wednesday for a pre-trial conference after they were accused of using hate ...
Politics
3 years ago

She further wanted the court to declare that several of the slogans uttered by the party amounted to hate speech and incite violence against white people.

“These slogans emanate from the apartheid era. The slogans at play are ‘kill the farmer‚ kill the boer’‚ ‘dubula Ibhunu’‚ ‘one settler‚ one bullet’ [and] ‘land or death’‚” Strydom said in her papers‚ adding that these utterances brought about fear in her as a white person living in the country.

She also wanted the slogans to be removed from the BLF’s social media pages and website‚ and for the court to bar the group from wearing clothing which has such slogans printed on it.

Strydom also requested that the court fine Mngxitama R150‚000‚ which she suggested go to an organisation promoting racial cohesion. She is also seeking an apology by the BLF for their statements.

In its responding papers‚ the BLF denied any wrongdoing and said the accusations made by Strydom were “unfounded”.

“I deny that any slogan of BLF amounts to racism or hate speech… To this end‚ I deny that there is any need for this court to make any explicit pronouncement against any slogan of BLF‚” said Mngxitama‚ adding that Strydom should have sought clarity on the context in which the slogans were said.

'Hate speech' - the case against the BLF

A woman who is taking Black First Land First (BLF) to the Equality Court for alleged hate speech wants the Independent Electoral Commission to review ...
Politics
3 years ago

He added that Strydom was not entitled to make any of the demands she has made.

“I deny the suggestion that the slogans ‘one settler‚ one bullet’ and ‘land or death’ constitute hate speech to white individuals‚” Mngxitama said.

He said “settler” was a term used to describe people who enslaved black people‚ people who stole land from the black people and those who killed them - and questioned whether Strydom fell into this bracket.

He further criticised Strydom for alleging that his party members wore T-shirts with the offending slogans printed on them‚ stating that there was no proof that these were indeed BLF members.

He added: “Even if the said person is a supporter of [the BLF]‚ the [BLF] has no control over what its supporters wear and how they dress.”

Mngxitama added that he saw no need for the court to order him to pay the R150‚000 fine nor issue an apology.

The case will return to court on September 20th.