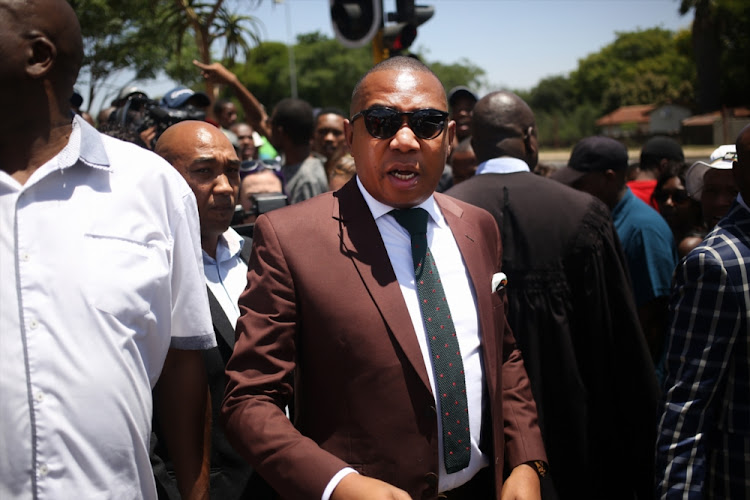 Parliament's ethics committee was only informed about ANC MP Mduduzi Manana's resignation from parliament just 30 minutes before the scheduled start of its hearing into his conduct.

This is despite Manana having been invited to appear before the joint subcommittee of the Ethics and Members' Interests committee at least 10 days ago. He never responded to their invitation.

Six MPs were present for the commencement of the hearing on Wednesday morning‚ five of them having been flown in from different parts of the country at taxpayers' expense. Parliament is still on its winter recess.

The meeting‚ which was scheduled to sit for three hours‚ only sat for about 10 minutes. MPs were officially informed about Manana's resignation and also received a one-page report reminding them that they only have jurisdiction over members of parliament.

“In light of his resignation, ...Manana is no longer a member of the assembly and by extension [no longer] a member of parliament. Consequently‚ the committee and the code [of ethics for MPs] finds no application on Honourable Manana in light of the allegations he was expected to answer‚” read the report.

Chairperson of the Ethics committee Omie Singh‚ who also chairs the subcommittee‚ said Manana's hearing would have taken place at 10am on Wednesday.

Former deputy higher education and training minister Mduduzi Manana’s resignation as a member of parliament was an attempt to “evade accountability”.
Politics
4 years ago

Despite having heard from the media about the resignation on Tuesday‚ Singh said he could not have called off the hearing on that basis and needed to get the resignation letter from National Assembly Speaker Baleka Mbete's office or from the office of the ANC chief whip Jackson Mthembu. “I only got that this morning at 9:30am.”

Singh also revealed that Manana was invited to attend the meeting as per the rules of parliament‚ but the former higher education deputy minister ignored the committee.

“He hasn’t been forthcoming with a direct answer to the correspondence we sent him. According to our rules we've got to inform a member in time‚ 10 days prior. We did that.

“I am very particular with regards to the checklist and timelines because you can't get this kind of cost of people flying in from different provinces and only to find that we were flawed with timelines‚” said Singh.

“He didn't respond. He never responded.”

The committee would have proceeded even without Manana being present if he was still an MP‚ as long as he had been notified and invited.

“But he knew his plan. I didn't know his plan‚” said Singh.

Manana was convicted for assault against two women and was sentenced to one year in jail or a fine or R100,000 by the Randburg Magistrate's Court in November last year. Recently he was accused of assaulting his domestic worker‚ but on Monday the NPA decided to drop this case.

In less than two weeks, two public figures seemingly survived prosecution by the National Prosecuting Authority (NPA). But even though they might not ...
News
4 years ago

The Commission for Gender Equality has stepped in to help Christine Wiro‚ the former domestic worker of ANC MP Mduduzi Manana who accused him of ...
News
4 years ago