De Lille 'agrees to disciplinary hearing going ahead in August' 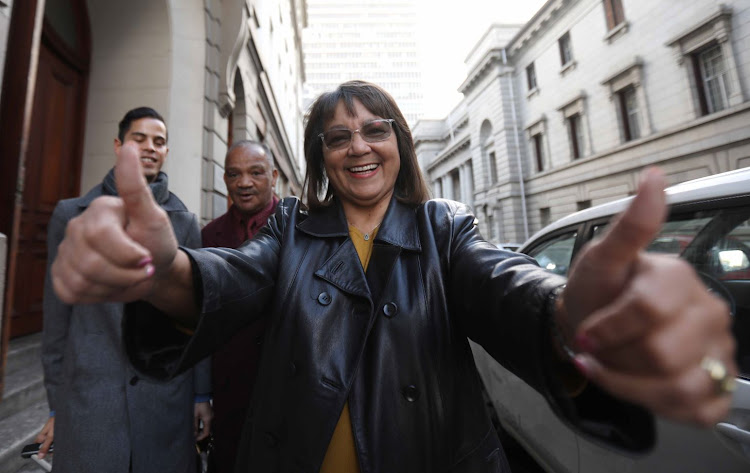 The agreement was part of the deal she struck on Wednesday night with the DA federal executive to halt a vote of no confidence in her leadership at the City of Cape Town council meeting on Thursday.

DA sources‚ who declined to be named‚ said the party’s Cape Town caucus was unhappy with being instructed on Thursday by federal executive chairman James Selfe to abandon the no-confidence vote.

“The caucus really wanted to proceed with the motion. We were confident it would succeed‚” said one senior official.

“Nobody trusts that [De Lille] will stick to the agreement‚ and councillors believe she is playing for time.”

Sources said De Lille had agreed that her disciplinary hearing would be held over six days in August. “If there are delays we will reinstate the motion of no-confidence at the end of August‚” said a caucus member.

Selfe looked sombre as he was the last person to leave the DA caucus meeting at the Civic Centre. He declined to comment‚ saying the DA would issue a statement later.

A DA motion of no confidence in its Cape Town mayor‚ Patricia de Lille‚ was dramatically scrapped on Thursday.
Politics
3 years ago

De Lille’s disciplinary hearing‚ in which she faces charges of maladministration and nepotism‚ has been delayed by disagreements over the composition of the panel and the mayor’s insistence that hearings be held in public.

DA counsel Sean Rosenberg‚ arguing in De Lille’s successful court action against the party’s so-called “cessation clause” in June said that the mayor was “stonewalling” the disciplinary process‚ as a result of which it could take a “number of years”.

Thursday’s scrapped motion‚ proposed by councillor Marian Nieuwoudt‚ said De Lille had been mired in controversy for the past year.

“The various allegations‚ independent investigations‚ prima facie findings‚ unanswered questions by herself and behaviour of the executive mayor has created distrust and a breakdown in confidence in her leadership‚” the motion said.

In February‚ De Lille survived a council vote of no confidence by one vote thanks to the support of the ANC opposition in the council and some DA caucus members.

Xolani Sotashe‚ the ANC leader in the City of Cape Town‚ said he was not surprised Thursday’s motion had been withdrawn. “It was expected. They were scared and not sure of their numbers‚” he said.

DA federal council chair James Selfe has been accused of trying to curry favour with senior party members as he fights a possible attempt to dump him ...
News
3 years ago

The Democratic Alliance's (DA) fight with Cape Town mayor Patricia de Lille is far from over as the party revealed on Monday that it would appeal the ...
Politics
3 years ago