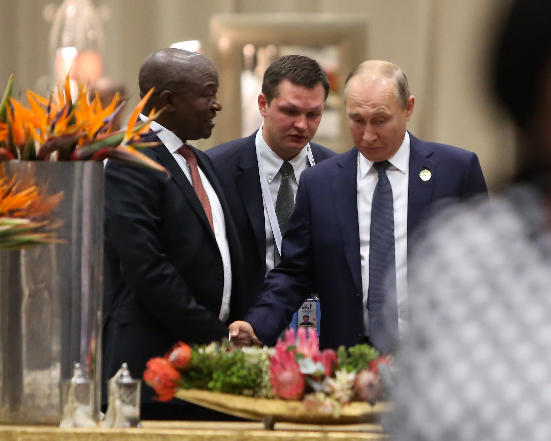 Russian president Vladimir Putin raised the subject of a nuclear deal at a private meeting with President Cyril Ramaphosa at the Brics summit in Johannesburg, but his host said Pretoria could not sign such a deal for now.

Russian state firm Rosatom was one of the frontrunners for a project to dramatically increase South Africa's nuclear power-generating capacity championed by former president Jacob Zuma.

Ramaphosa has put nuclear expansion on the back burner since taking office in February, saying it is too expensive, and has focused instead on pledges to revive the economy and crack down on corruption.

"While we remain committed to an energy mix that includes nuclear, South Africa is not yet at the point where it is able to sign on the dotted line," Ramaphosa's spokesperson Khusela Diko said about the meeting between Putin and Ramaphosa.

While the government has maintained that it has not entered into any nuclear deals‚ reports of an open tender and a clinched deal of a ...
Politics
5 years ago

Hours earlier, ANC treasurer-general Paul Mashatile, one of the top six officials in the party, had said that Pretoria would not rush into major nuclear investments but that it was still open to future deals with Russia.

"Once we are clear that this is affordable for us to do, we are open for business including with Russia," he said.

While we remain committed to an energy mix that includes nuclear, South Africa is not yet at the point where it is able to sign on the dotted line

He spoke on the sidelines of the three-day Brics summit in Johannesburg attended by the leaders of Brazil, Russia, India, China and South Africa.

"I think the approach we will take is to avoid the Big Bang approach. The initial intervention was that we would do close to 10 000 megawatts (MW). ... It's unaffordable," he said.

Mashatile also said the ANC wanted greater private investment in struggling state-owned power utility Eskom, which swung to a loss for the year to end-March.

Russia wants to turn nuclear energy into a major export industry. It has signed agreements with African countries with no nuclear tradition, including Rwanda and Zambia, and is set to build a large nuclear plant in Egypt.

"If there is a place for nuclear energy in the energy mix, we are happy to cooperate. We are happy to follow each and every procedure that will be communicated to us by the South African government," said Dmitry Shornikov, Rosatom's chief executive for central and southern Africa.

I think the approach we will take is to avoid the Big Bang approach. The initial intervention was that we would do close to 10 000MW ... it's unaffordable

Rosatom on Thursday signed a separate agreement with state nuclear firm Necsa to explore joint production of nuclear medicines and other ways of harnessing nuclear technology, a statement from the two firms showed.

The agreement, which is non-binding, is a further sign that Rosatom is keen to cement its position on the African continent.

South Africa currently operates Africa's only nuclear power plant, with an installed capacity of around 1 900 MW.

The nuclear expansion deal backed by Zuma envisaged adding 9 600 MW, but ratings agencies cited the project as a cause for concern given the country's recurring budget deficits and ballooning public debt.

South Africa cannot afford large-scale expansion of its nuclear power fleet but would still be open to future nuclear deals with Russia, the ruling ...
Business
3 years ago

Russian president Vladimir Putin's in SA for the BRICS summit. We think he should stay on for a vaycay 'cause there’s plenty of bare-chested, macho ...
Lifestyle
3 years ago

Just hours after being sworn in as acting president‚ Jeff Radebe nailed his colours to the renewable energy mast at African Utility Week on Tuesday.
Politics
3 years ago