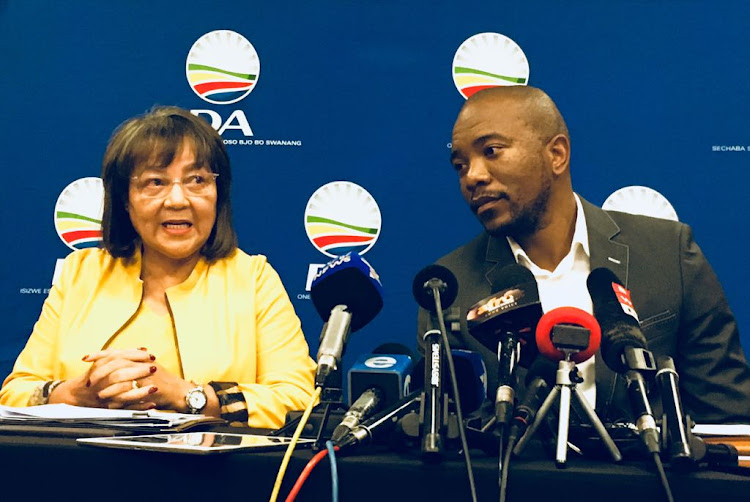 Thirteen months after the first shots were fired‚ the DA and its Cape Town mayor Patricia de Lille declared a truce on Sunday.

Appearing together at a Cape Town news conference‚ De Lille and DA leader Mmusi Maimane said they had agreed the mayor would step down on October 31‚ after a “smooth transition” to her successor.

De Lille will remain a DA member‚ but neither she nor Maimane would say what role the veteran politician might play in the party. There have been suggestions that she will become an MP or a member of the Western Cape legislature.

The two politicians seemed relaxed and happy in each other’s company after a fraught 13 months which has seen De Lille and the DA at war in court‚ disciplinary hearings‚ caucus and council meetings and numerous press conferences where they have flung dirt at each other.

De Lille moves in for de kill as the DA is outmanoeuvred... again

It outlined 16 issues in which Smith and other members of the City of Cape Town DA caucus believed De Lille had erred‚ and said: “It is best to resolve the conflict now‚ remove the causes of the tension and start rebuilding the unit‚ collective vision and cooperation of the caucus.”

Thirteen months later‚ and with less than a year to the national and provincial elections‚ De Lille and Maimane said at Sunday’s news conference their agreement finally made that possible.

Maimane said: “This has been a long and difficult journey. The matter has already gone on for too long and has sapped the energies and attentions of both parties from our core work‚ for which we apologise.”

Patricia de Lille resigned as Cape Town mayor after months of infighting in the Democratic Alliance between certain party members. De Lille said at a media conference on August 5 2018 she was happy about the decision and would continue to be a DA member working on transformation within the city of Cape Town.

De Lille said: “While I have been fighting for my rights to prove my innocence‚ and although I was ready to proceed with my disciplinary hearing‚ I also realise that this fight between myself and the DA cannot continue forever.

“Now that the DA have withdrawn the charges against me and I have cleared my name‚ I have decided to step aside.”

Maimane said candidates to take over as mayor would have to put their names forward‚ adding that there was no predetermined outcome, such as giving the job to the DA leader in the Western Cape‚ Bonginkosi Madikizela.

"I'm looking for the best person to lead the City of Cape Town and deliver services to the people."

DA Leader Mmusi Maimane says his party is ready to mount a lone fight against "a coalition of populists" between the ANC and the EFF on the issue of ...
Politics
3 years ago

Plans are in motion to change the Nelson Mandela Bay government before the end of next week.
Politics
3 years ago