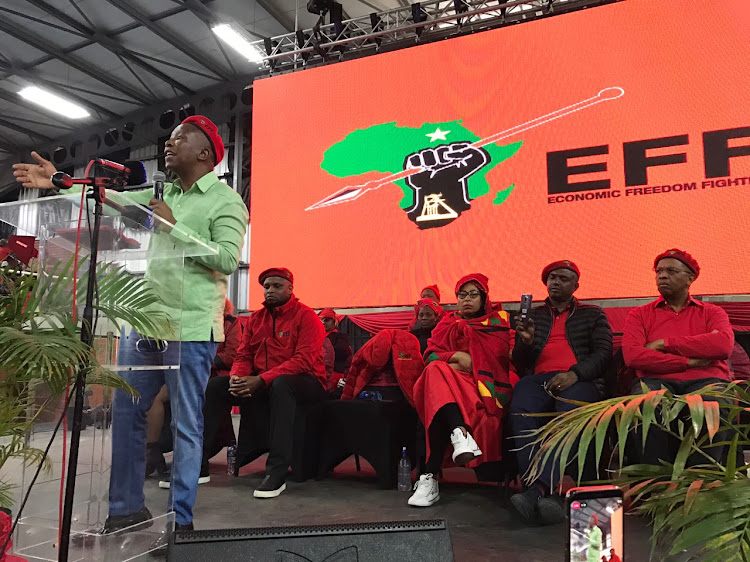 EFF president Julius Malema received a hero's welcome in Pietermaritzburg as he prepared to address a Women's Day event.

Hundreds of EFF supporters braved the chilly weather in the KwaZulu-Natal capital on Thursday to attend the red brigade's Women's Day celebrations‚ which was also used as a launching pad for their campaigning ahead of 2019 elections.

The Caluza Sports Centre in Edendale was packed to capacity as EFF supporters‚ including elderly women‚ waited patiently for their leadership to arrive. They were treated to performances by various artists‚ including maskandi‚ hip-hop and rap performers.

When Malema and the party's leadership did arrive‚ the hall erupted into a cacophony of ululation and whistling. The leaders walked in through the hall's back entrance at exactly 12.45pm. He brought the house down as he and EFF's top brass‚ including his deputy Floyd Shivambu‚ secretary general Godrich Gardee‚ deputy secretary Hlengiwe Mkhaliphi and national chairperson Dali Mpofu‚ walked to the stage. There were also other EFF MPs in attendance.

It was all an act: Malema sticks to his guns over ‘rifle’

EFF leader Julius Malema is sticking to his guns and continued to insist that he did not fire a real gun or live ammunition during the party’s fifth ...
Politics
3 years ago