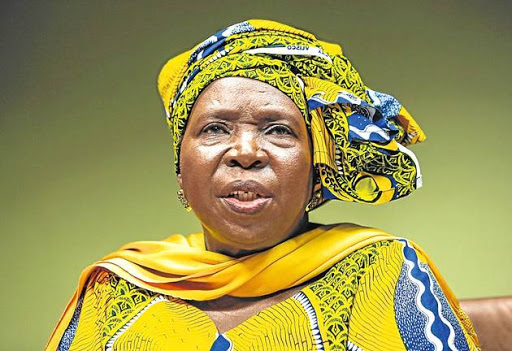 Inter-Ministerial Task Team led by Minister in the Presidency‚ Nkosazana Dlamini-Zuma reported to the NCOP that it was worried about the safety of the civil servants who had been seconded from national departments to help turnaround the governance situation.
Image: Simphiwe Nkwali/ Sunday Times

The lives of top technocrats sent by cabinet to trouble-shoot governance problems in the North West are at risk.

This after they received threats‚ apparently from those opposed to the national intervention plan.

Government has now resolved that it should provide full-time security to the team of seven caretaker administrators of the North West‚ as well as their support staff‚ until their mandate is terminated.

Details of the beefed up security and the threats was disclosed on Thursday to an ad hoc committee of the National Council of Provinces that is overseeing the cabinet's intervention in the province. The intervention is at the behest of an Inter-Ministerial Task Team (ITT) led by Minister in the Presidency‚ Nkosazana Dlamini-Zuma‚ and her director-general Mpumi Mpofu.

The ITT‚ which has taken over the administration of the entire North West province following a cabinet resolution that followed months of violent service delivery protests in the platinum province‚ reported to the NCOP that it was worried about the safety of the civil servants who had been seconded from national departments to help turnaround the governance situation.

Mpofu said the threats - along with disputed outstanding payments to service providers – were among the challenges facing the troubleshooting team.

Dlamini-Zuma said she wanted the threats to be properly looked into.

"I'm not saying in particular who is making the threats because we don't know. If we knew already we would've gotten people arrested‚" said Dlamini-Zuma.

"If they threaten it's a problem that cannot be left unchallenged. It could also be that if I had a contract and it's being stopped‚ I may also make threats as well."

Following the threats‚ Dlamini-Zuma said a decision was made to provide security to the technocrats.

Approximately 100 members of the community in Majakaneng barricaded the R104 road on Wednesday morning with various objects including burning tyres‚ ...
News
4 years ago

"It's a matter we've discussed and we've asked the security cluster to provide the necessary security to the officials that are being threatened. If we find them‚ we'll deal with them‚” she said.

Mpofu said the ITT was making good progress‚ with particular focus on irregular expenditure and "restoring the credibility of supply chain management practices with provincial government departments‚ especially in the office of the Premier”.

Mpofu said they were re also turning things around in the provincial health department where there was poor contract management and the "irrational processes‚ such as paying monthly maintenance for idling equipment‚ is being addressed”.

She said there were disputes between the provincial public works department and service providers over outstanding invoices‚ with the legitimacy of some of them being questioned by the intervention team.

"Despite this short period [of intervention]‚ we really believe we've stabilised governance and service delivery challenges in the province. There's still a lot of work to be done but the institutional arrangements are there‚ the teams are there.

"We've even put the spotlight on the major issues that in the findings were of concern‚ the issues around irregular contracts‚ irregular expenditure [and] the audit findings which have been running over a number of years are now the focus of the intervention‚” said Mpofu.