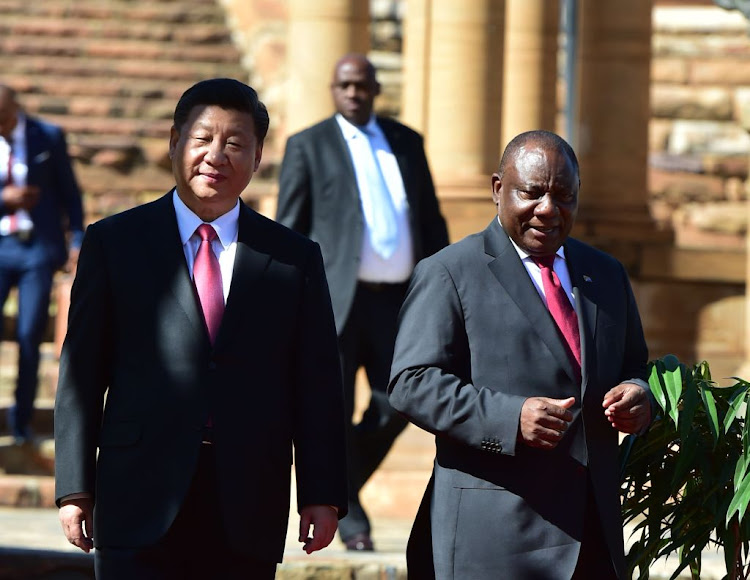 The West‚ not China‚ is exploiting the African continent and China is all over Africa as a "newcomer" to break that monopoly.

That is according to Chinese ambassador to South Africa‚ Lin Songtian‚ who was speaking at a media briefing in Richmond‚ Johannesburg‚ on Wednesday. Lin said the West had for years exploited natural resources of the continent while leaving under development and poverty behind. China's dominance in Africa was an attempt to change this‚ he said‚ for the Chinese were about "win-win" cooperation.

China‚ he said‚ had no ambitions to follow in the footsteps of the West which drew raw resources from Africa to refine them in their countries and then sell back to Africa at a "high price".

Said Lin: "The mineral resources in this continent have been controlled and monopolised by the West since the colonialist times up to today.

"China is a newcomer because in the year 2000 our investment to Africa was less than $1-billion. China will never repeat or follow the old past of the colonialist ways. We are here to work together for a win-win cooperation and we will never come here just to exploit and run away."

Lin said the West controlled all the old and other mineral resources from Cape to Cairo. "That is the meaning of exploitation."

The ambassador also blasted the US and its president‚ Donald Trump‚ for being bullies and sabotaging the global economy with the trade wars between China and the US.

"President Trump likes making America great but he cannot‚ at the sacrifice of all the world‚ because not only China will suffer for this but no one will survive‚" said Lin.

He accused Trump of changing the rules of global economic trade in a selfish manner that will eventually hurt America as well.

"What the US is trying to achieve is an America-only model which will not benefit anyone. To achieve that‚ the US is willing to sacrifice the free multilateral trading system and sacrifice the collective shared interest of the international community. This is complete unilateralism‚ protectionism and extreme individualism. They believe in the long old law of the jungle of the strong bullying the weak. There will be no winner in a trade war."

Trade between South Africa and China must be "mutually beneficial": Mashatile

According to Lin‚ so involved is China in Africa that almost every road and airport in the continent was built by the Chinese.

And to perpetuate this further China had pledged $60-billion for infrastructure development in Africa‚ either by grant or on a loan basis‚ which in the past two years had led to the completion of various major projects‚ mostly in East Africa.

South Africa is the biggest beneficiary in Brics bloc

Lin said the argument that South Africa was not benefiting from Brics because of major players such as China and Russia was not true.

"South Africa has already hosted two Brics summits and when you host Brics you become the focus of the international community. The decision to join Brics serves the interest of the South African people. South African trade with Brics countries from 2011 to 2016 has increased by 54.7%. The Brics development bank had its regional centre located in Joburg."

What South Africa will get out of the Brics Summit

The commitment to build an artisan training centre‚ the development of space technology and agricultural research are some of the gains made by South ...
Politics
3 years ago

African countries not implementing agreements with China have themselves to blame

According to Lin‚ China makes agreements and financial commitments with many countries‚ but those who do not implement them cannot blame the Chinese.

He said: "God helps only those who help themselves. China comes to Africa to create partnerships not ownerships. If you are not ready we cannot help you. We are not God but China has never made an empty promise."

Lin announced that his office and the South African departments of international relations and of home affairs were finalising the easing of visa requirements as agreed by heads of states from both to allow smooth movement of the people of China and SA between the two countries.

This‚ he added‚ would bolster the South African economy.

"The visa agreement is very important. The South African people travelling to China and Chinese to South Africa will get one visa valid for five years with multiple entries allowed each time for 90 days. This will encourage people to travel between the two countries and learn from each other‚ and South Africa is the best tourism destination in the world."

Lin also praised President Cyril Ramaphosa for the planned Investment Summit in the country saying Chinese businesspeople would attend to their numbers to help end poverty in SA.

ANC looks to China for election strategy and tactics

The ANC is looking East and bringing in the Chinese to provide lessons on propaganda and discipline ahead of the 2019 general poll, which  ...
News
3 years ago

"Poverty is the common enemy"

He said South Africa was on the right path with Ramaphosa's investment drive if poverty was to be defeated.

Lin cited China and how it has reduced people living in poverty from more than 700-million people in 1978 to 30-million as things stand.

To this end China had committed to wiping out poverty by 2021 and South Africa had lessons to learn from Chinese strategy.

In the wide-ranging‚ two-hour long media briefing‚ Lin also did not shy away from controversy. He sang the praises of Ugandan dictator Yoweri Museveni for his economic brains.

"His excellency president of Uganda is so smart he said some countries do not understand the continent and what it needs‚ which is industry development with three driving forces‚ including investment‚ open trade and tourism and industrialisation‚" said Lin.