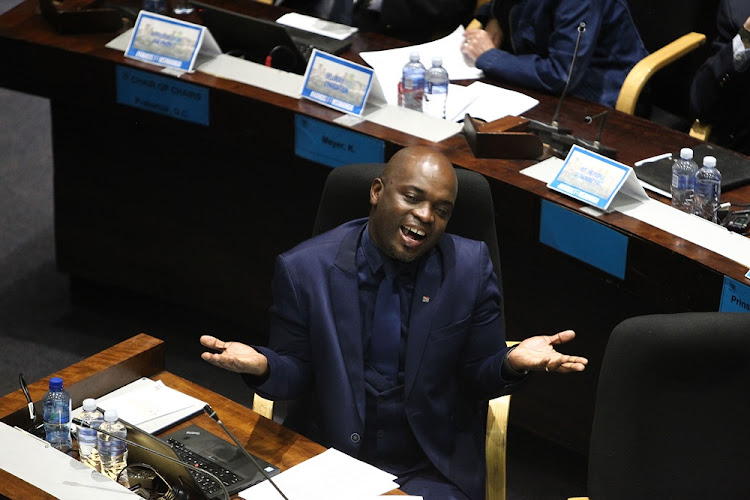 Solly Msimanga ahead of the two motions of no confidence tabled before the council to remove him as the mayor of Tshwane on August 30 2018. He survived both motions.
Image: Thapelo Morebudi

Solly Msimanga has survived two bids to oust him as mayor of Tshwane mayor.

The EFF and ANC tabled separate motions of no confidence in Msimanga over a R12-billion consultancy tender‚ which led to the suspension of city manager Moeketsi Mosola last week.

However, the speaker of council, Katlego Matheba, disallowed the EFF's motion, stating that it did not comply with the council's rules. The ANC then later withdrew its motion, sealing Msimanga's survival.

The ANC has withdrawn it's motion of no confidence in #SollyMsimanga saying they will be heading to court to support #EFF on thier disallowed motion. #SollyVote

Had either of the motions succeeded, Msimanga would have been the second DA mayor to have been removed from office after the EFF teamed up with opposition parties to oust DA chairman Athol Trollip as mayor of the Nelson Mandela Bay municipality.

The ANC meanwhile is calling for fresh elections in Pretoria and Johannesburg‚ claiming that coalition-led governments have “proven to be too costly to maintain”.

There is a heavy police presence in the Pretoria CBD today‚ ahead of a crucial sitting of the city council which will decide mayor Solly Msimanga’s ...
Politics
3 years ago

Will Solly Msimanga and Herman Mashaba be the next DA mayors to fall?

The 2016 municipal election was a watershed moment for the ANC. It lost its majority in the metros of Johannesburg, Tshwane and Nelson Mandela Bay.
Politics
3 years ago