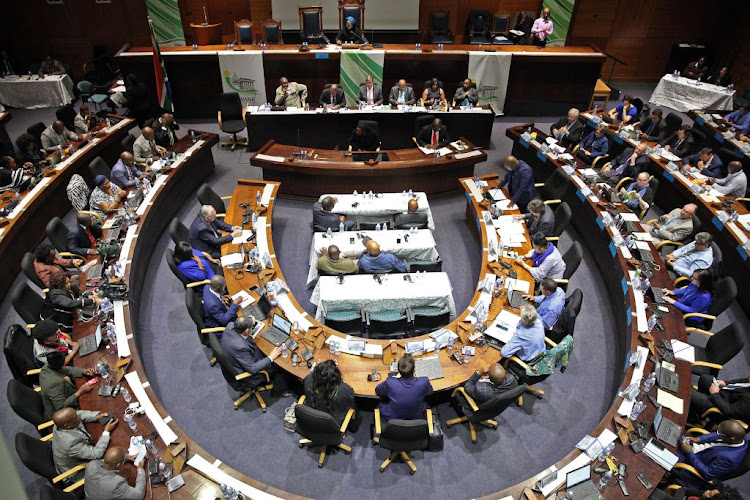 Mayor Solly Msimanga addresses the Tshwane city council on August 30, 2018 before the EFF and ANC were due to bring motions of no confidence against him.
Image: Thapelo Morebudi

The EFF has vowed to go to court “as soon as possible” to seek an order that a ruling by Tshwane Speaker Katlego Mathebe – which disallowed their motion of no confidence in mayor Solly Msimanaga - be set aside.

The party has also threatened to bring a separate motion to remove Mathebe as council speaker.

During a heated council meeting‚ Mathebe ruled that the EFF motion on Msimanga was not compliant with council rules‚ drawing angry reactions from the party. This means that the EFF can only vote on another motion to be brought by the ANC‚ if that motion is allowed in council.

Msimanga was facing two motions of no confidence‚ one each from the ANC and EFF‚ who had banded together to vote Msimanga out following revelations of an allegedly dodgy R12-billion tender.

The EFF’s Benjamin Disoloane expressed his unhappiness over Mathebe’s ruling‚ saying the party was going to bring new motions against both Msimanga and Mathebe.

He said the EFF was going to fight to ensure Msimanga was no longer a mayor of Tshwane.

“You disallowing our motion‚ Speaker [Mathebe]‚ you are declaring a war against us‚” he said.

The parties have since asked for a caucus‚ but if the EFF does not vote after lunch‚ Msimanga will in all likelihood survive as the ANC alone with 89 councillors does not have enough numbers to remove him.

Disoloane told TimesLIVE that they would seek a court order “as soon as possible”.

There is a heavy police presence in the Pretoria CBD today‚ ahead of a crucial sitting of the city council which will decide mayor Solly Msimanga’s ...
Politics
2 years ago

Tshwane’s Msimanga ‘surprised’ at EFF plan to oust him

City of Tshwane mayor Solly Msimanga said on Tuesday that he was taken by surprise by the moves by the EFF to remove him as the capital city’s first ...
Politics
2 years ago
Next Article