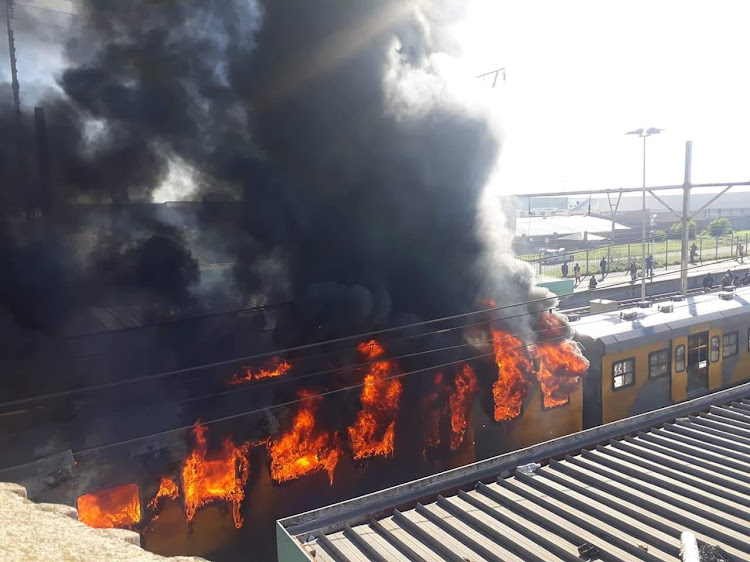 A train on fire at Koeberg station in Cape Town on August 21, 2018. File photo.
Image: City of Cape Town

Only two people have been arrested for arson attacks on Cape Town trains in the past decade‚ and no one has been convicted.

A spate of arson attacks this year has left Metrorail with less than half the number of trains it needs to run its Cape Town commuter service.

The number of passengers has declined by 40% in three years‚ and Zille said this had a direct effect on Cape Town’s road congestion — the worst in the country.

The premier said she wanted an urgent meeting with the provincial police commissioner‚ Lieutenant-General Khombinkosi Jula‚ to find out what the police were doing to tackle the arson attacks.

Firefighters responded to yet another train fire in Cape Town on Tuesday morning.
News
3 years ago

Commuters already affected by disruption to passenger train services were warned to expect even more woes after three buses were attacked and two ...
News
3 years ago

“Train burning is economic sabotage on a grand scale. There needs to be sufficient urgency and expertise brought to bear on investigating‚ arresting‚ charging and convicting those responsible.

“It is wholly unacceptable that not a single person has been held accountable for these brazen attacks‚ many of which are initiated in broad daylight and in busy carriages. The question must be asked: why?”

The provincial government has contributed R16-million to a year-long project with Metrorail and the City of Cape Town to set up and run a team of 100 law enforcement officers to protect rail commuters and infrastructure. It has also offered a R100‚000 reward for the conviction of arsonists.

Zille said: “The sabotaging of people’s daily commuting system is a direct attack on freedom of movement and has serious knock-on effects for the Western Cape economy and productivity. The organised criminal elements behind these attacks must be exposed.”