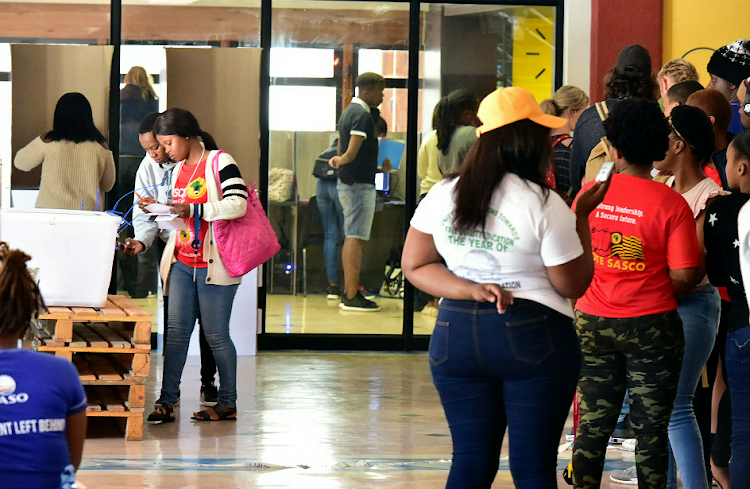 Sasco chairperson Mqondisi Duma in KwaZulu-Natal says is is political folly of the worst order to say that the outcomes of the SRC elections at institutions of higher learning are a determinant political mirror of the society elections as they prepare for the 2019 general elections
Image: Eugene Coetzee

The South African Students Congress (Sasco) in KwaZulu-Natal has warned critics not to read losses in some Student Representative Council (SRC) elections as an indication of what is likely to occur in the 2019 national elections.

In previous years‚ ANC-aligned student movement Sasco had enjoyed a stronghold on these campuses.

“We want to caution political analysts who want to attack the African National Congress indirectly‚ using the recent elections as a cover‚ to show their political prejudice against the ANC‚” said Sasco KZN chairperson Mqondisi Duma during a media briefing at the ANC provincial offices on Monday.

Political analysts have said that the EFF’s recent victories at a number of key institutions of higher learning could play a major role in the ANC's chances of winning the 2019 national elections.

“It is political folly of the worst order to say that the outcomes of the SRC elections at institutions of higher learning are a determinant political mirror of the society elections as we prepare for the 2019 general elections‚” said Duma.

“These losses are only attributed to our own internal weaknesses as opposed to the strength of our ideological opponents‚” he added.

However he didn't elaborate what these weaknesses were.

Meanwhile‚ EFFSC president Peter Keetse believes that their wins at institutions of higher learning would definitely reflect at the polls in 2019.

“These victories will inspire many voters who were uncertain about the EFF to go out and vote for them. Our victories are not magic‚ they are the work by the fighters on the ground who will form the national voting populous‚” said Keetse.

“People in townships and villages will see students in institutions like UCT and Wits voting for the EFF and see that the EFF is not a party for hooligans like it is often portrayed‚ that the party is more than that‚” he said.