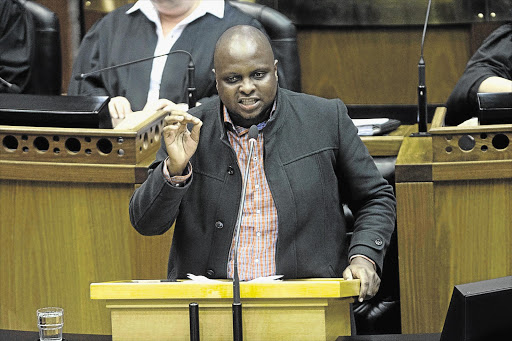 At the conclusion of his speech during the debate‚ ANC MPs shouted that Shivambu should "pay back the money".
Image: TREVOR SAMSON

Chaos returned to the National Assembly on Tuesday as ANC MPs shouted "pay back the money" during a debate on the VBS Mutual Bank scandal in which the governing party and other opposition parties united in attacking the EFF.

In a sitting that mirrored the Zuma years in which MPs got accustomed to trading insults‚ the party of Julius Malema - in particular its deputy president and chief whip‚ Floyd Shivambu - came under attack over revelations that Shivambu’s younger brother‚ Brian‚ had received R16-million from the R1.9-billion that was looted from VBS.

At the conclusion of his speech during the debate‚ ANC MPs shouted that Shivambu should "pay back the money".

There were also allegations that R10-million of the money received by Brian was transferred to his MP elder brother but Shivambu and Malema have denied this.

During a debate on "The Great Bank Heist" MP after MP had a go at Shivambu and the EFF‚ saying the EFF chief whip had used his younger brother to plunder taxpayers' money in the same way former president Jacob Zuma had done with his son Duduzane.

However‚ the onslaught on the EFF and its deputy president continued‚ with Agang SA MP Andries Tlouamma upping the ante.

"What is the difference between Brian Shivambu and Duduzane Zuma? We used to say Baba kaDuduzane‚ today we must say Brother ka Brian Shivambu‚ there's nothing wrong thanks to the EFF.

"I want to [tell] the house and South Africans that a brother of [a] VBS looter‚ still has the audacity and arrogance to educate us while he failed to notice his brother's looting ways‚" said Tlouamana‚ amid applause from some MPs from both the ANC and DA.

ANC MP Thandi Tobias‚ who was the sponsor of the debate and serves with Shivambu in the finance committee‚ alleged the EFF leader had privately expressed opposition to the curatorship of VBS.

"I also need to take the house in confidence‚ that honourable Shivambu did not want the bank to be put under curatorship. He instead said we must meet the king (Venda king Tony Mphephu Ramabulana)‚ the king who got a gratuity (R17-million)‚" said Tobias.

ANC MPs howled at Presiding Officer Grace Borotho‚ who is also part of the ANC caucus‚ when she attempted to rule against Tobias referring to what was not an official report.

"You may howl at me‚ but that's the correct thing‚ there's no finance (committee) report before the house that we're discussing‚" Borotho retorted.

Shivambu accused Tobias of lying to the house.

"She's casting aspersion against me‚ that person is lying. If Thandi wants to do that‚ she must then disclose everything that she does‚ the monies that she receives."

Yunus Carrim‚ another ANC MP who is the chairperson of the finance committee‚ said it was "hypocritical" of the EFF and the DA to be lashing out at each other while they were working together in metro municipalities such as Tshwane and Johannesburg.

The South African Broadcasting Corporation (SABC) says it has taken action to investigate possible breaches in its editorial code regarding the ...
News
2 years ago

'Widespread issues' at municipality that deposited R245m into VBS bank

The provision of services at Fetakgomo Tubatse Municipality in Limpopo has deteriorated as a result of illegal investments in the VBS Mutual Bank ...
Politics
2 years ago

The DA has received confirmation that parliament’s joint committee on ethics and members’ interests will be launching a probe into EFF deputy ...
Politics
2 years ago

Economic Freedom Fighters (EFF) deputy president Floyd Shivambu has denied he was in any way conflicted when he attended parliamentary hearings on ...
Politics
2 years ago