If DA had gone to court sooner‚ Zuma would have paid for legal fees: lawyer 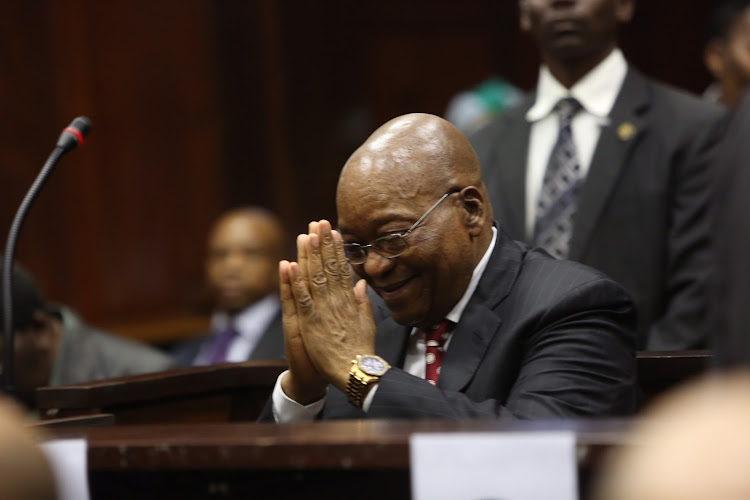 Former president Jacob Zuma appears in the Durban High Court on June 8 2018. He is charged with 16 counts, including fraud‚ corruption and racketeering.
Image: Jackie Clausen / Pool

Jacob Zuma’s legal counsel says an application by the DA challenging decisions by the state attorney and the presidency to cover the former president’s legal costs is a bid by the party to portray itself as the “champion of accountability”.

“It is clear that this litigation is part and parcel of the DA’s political strategy to undermine its political enemy and to portray itself as the champion of accountability in public life‚” Zuma’s counsel Thabani Masuku SC argued in papers filed at the Pretoria High Court.

The DA has approached the court seeking a review of the decisions taken by the state attorney and the presidency to pay Zuma's legal fees‚ and wants them to be declared unlawful and set aside. The EFF has joined the DA in the matter.

According to the party‚ the state has already spent at least R15.3m on Zuma's legal fees. Zuma faces 18 criminal charges‚ including counts of fraud‚ racketeering‚ and money laundering.

Zuma’s fees‚ according to the EFF‚ have reached R32m.

The case is about whether the state should pay for Zuma's personal woes. The DA argued in court on Tuesday that Zuma should pay back the money the state attorney paid to cover his legal fees in criminal cases he faced in his personal capacity.

The party argued that Section 3 (1) of the State Attorney Act does not provide for the covering of Zuma’s legal fees in his personal capacity. The section states that the state attorney shall perform work on behalf of the government.

'Pay up' - Twitter responds to Jacob Zuma & his legal fees

The court battle betwen the DA and Zuma continues, with the DA fighting to have him personally cover his legal fees.
Politics
3 years ago

The North Gauteng High Court has heard that the only way former president Jacob Zuma and his legal team were able to employ “Stalingrad” legal ...
Politics
3 years ago

“The government was not a party to the criminal proceedings in which Zuma was the accused in his personal capacity‚” counsel for the DA Sean Rosenberg SC argued.

Masuku‚ however‚ has accused the DA of using the litigation as part of its campaign during the 2019 general elections. “The court must refuse to assist the DA in its political campaign against Zuma by dragging matters dating as far back ten years into the court in contravention of the provisions of the Promotion of Administrative Justice Act (Paja) under the guise of public interest.”

“The purpose of this application is essentially to affect Zuma’s ability to defend himself in the criminal court. It is part of the political stratagem to put the prosecution of Zuma under political pressure and manipulation‚” argues Masuku.

He said if the DA had brought the application as early as 2008‚ Zuma would have made other plans to get funding.

“Had the DA brought the application as early as it was enjoined to do so in terms of Paja‚ Zuma may well been made aware that the state attorney is not authorised to grant him legal assistance in his cases. That could have helped him to find other sources of funding much earlier than it is at this stage.”