Turmoil, factions and Richard Mdluli: Inside day one of the interviews for the new NPA boss 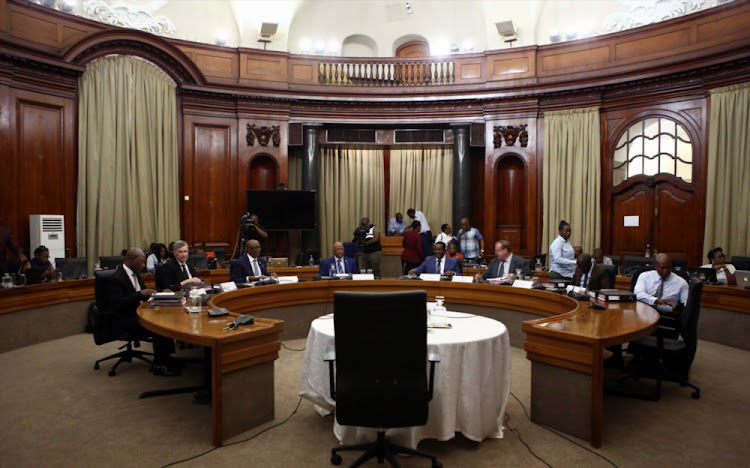 The panel waits to interview candidates for the position of National Director of Public Prosecutions at the Union Buildings on November 14, 2018 in Pretoria. The interviews were conducted by an advisory panel led by Minister of Energy Jeff Radebe.
Image: Gallo Images / Phill Magakoe

The decision to withdraw murder charges against notorious former crime intelligence head Richard Mdluli came back to haunt director of public prosecutions in Johannesburg, Advocate Andrew Chauke, during his interview for the position of National Director of Public Prosecutions.

Chauke was the last of five candidates to be interviewed for the NDPP job on Wednesday. He and four others were interviewed by an eight-member panel, led by energy minister Jeff Radebe.

A member of the panel, Advocate Mvuzo Notyesi, referred to a 2013 judgment in which Judge John Murphy criticised Chauke for withdrawing the murder charge against Mdluli in 2011. The court took exception to Chauke’s decision to call for an inquest in the matter of Oupa Ramogibe’s death, instead of a prosecution.

But Chauke defended this decision.

“You asked me if I would still take that same decision now. I would,” he said.

Chauke maintained that the evidence against Mdluli was circumstantial, despite two court rulings that overturned his decision.

Notyetsi said Murphy reviewed his decision as incorrect - and that was upheld in the Supreme Court of Appeal.

An earlier candidate was also grilled over a decision he took in a case.

Chief prosecutor in Pretoria, Matric Luphondo, faced tough questioning about his role in the failed prosecution of a case involving the theft of R17m in forex from the headquarters of the State Security Agency.

Luphondo was asked why the case was withdrawn despite the fact that there was prima facie evidence.

He was the prosecutor in the case where a group of men allegedly stole millions from a safe at the State Security Agency's Pretoria headquarters between Christmas Day and Boxing Day.

Luphondo said he withdrew the case after the police had identified two suspects based on one picture from CCTV footage from the SSA headquarters. He insisted that he could not prosecute two people based on contradictory statements.

The turmoil in the upper echelons of the NPA was also laid bare during the first day of interviews. Chauke spoke about factionalism plaguing the organisation.

DA MP Glynnis Breytenbach has given a thumbs up to the candidates shortlisted for the position of SA’s top prosecutor, with Shamila Batohi, Rodney de ...
Politics
3 years ago

“We as DPPs, when we interact with them, we can see this one has a problem with the other one.”

When asked whether he was part of these factions, Chauke said he had managed to “transcend beyond those factions.”

Luphondo told the panel that for the NPA to be stabilised “things need to be put right at head office”.

He further noted that reports that former NDPP Shaun Abrahams went for a meeting to the ANC’s Luthuli House headquarters a day before he charged minister Pravin Gordhan in 2016 did not assist dwindling public confidence in the NPA.

Earlier in the day, Advocate Matodzi Makhari, who works for the NPA in the North West, said trust and confidence in the NPA had been eroded.

“It appears our country has lost confidence in us,” she said.

The interviews were opened to the public after a successful court challenge by the Right2Know Campaign.

President Cyril Ramaphosa appointed the eight-member panel to shortlist candidates and conduct interviews after the Constitutional Court ruled in August that the appointment of Abrahams was invalid.

The panel is expected to submit its final recommendation to Ramaphosa by December 7.

The trick is not to bow to pressure, says candidate for top NPA job

Former Transnet general manager Advocate Siyabulela Mapoma has listed what he believes makes him the perfect candidate to become the next national ...
News
3 years ago

DA MP Glynnis Breytenbach has withdrawn her candidacy for the National Director of Public Prosecutions.
Politics
3 years ago

Interviews for NPA boss position to be open to the media

Advocacy group Right2Know (R2K) has won its court bid to force President Cyril Ramaphosa to make the interviews for the new National Prosecuting ...
News
3 years ago