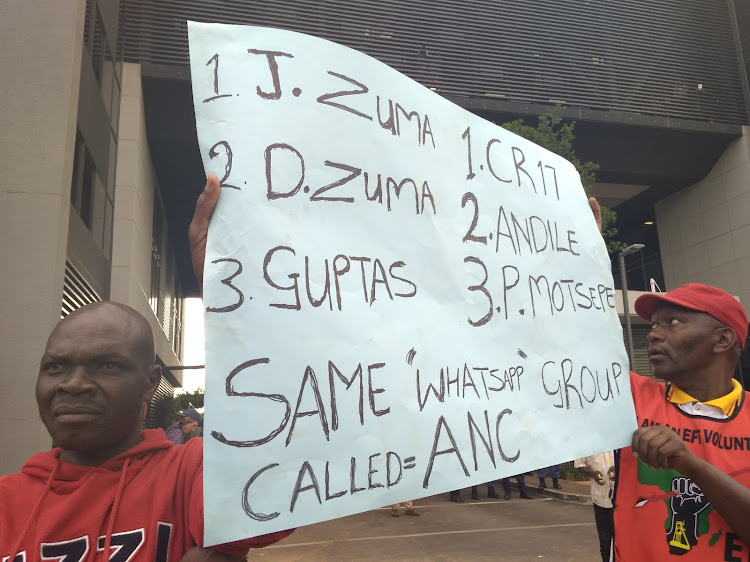 He said the relentless pursuit of Gordhan by the EFF was a means to show South Africa how rotten the ANC was.

Speaking from a makeshift stage on Tuesday, Malema also boasted to his supporters that he was the only (former) ANC politician who had never met the Guptas.

"I have got nothing to hide, why (is it) the so corrupt Malema never met the Guptas?" Malema asked.

He told supporters that "exposing” Gordon was tantamount to collapsing the ANC in its entirety. “Gordhan and Zuma, same WhatsApp group. The name of the WhatsApp group is ANC and Cyril Ramaphosa is the administrator. The ANC must fall.

"How can Pravin be part of the corrupt ANC and not be rotten himself? Why do you say the ANC is corrupt and then say Pravin and Cyril are different? They are the same," Malema said.

WATCH | 'Just like Zuma and Nene, we will remove you' - EFF tells Pravin Gordhan

"We are here to expose you!"
Politics
2 years ago

He claimed that Gordhan fought "dirty" but said the EFF was not afraid of him.

“We are fighting, and there are no roses, in a war there is blood. We cannot go against Pravin and expect roses. Where we meet the enemy, we must crush the enemy. When the enemy raises its ugly head, don't hit the head, cut the head,” he said to raucous applause.

Malema said Gordhan had questions to answer, alleging that the minister had a bank account in Canada and was supposedly planning to retire in the North American country.

Gordhan has rubbished the attacks as a "fake news onslaught" saying all his interests had been declared to parliament.

AfriForum may seek to have Malema and EFF declared bankrupt

Civil rights organisation AfriForum says it may have to have Julius Malema and the EFF declared bankrupt in an attempt to recover legal costs that ...
Politics
2 years ago

Calls for Gordhan and ANC to 'fall' continue outside commission

Calls for Pravin Gordhan to resign - and for the expropriation of land without compensation - have kept the EFF stage buzzing on Tuesday as party ...
Politics
2 years ago

Gordhan: 'I am not a commodity for sale ... the Guptas learnt that'

Public Enterprises minister Pravin Gordhan has lashed out at his critics, including the EFF,  saying to the Zondo commission of inquiry: “I am not a ...
Politics
2 years ago