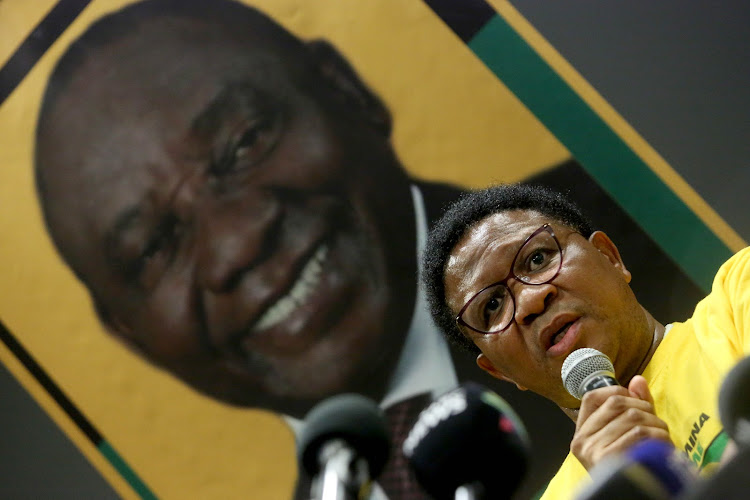 ANC elections head Fikile Mbalula speaks to the media in Durban on Wednesday to announce the party's plans for the January 8 statement.
Image: Thuli Dlamini

The ANC’s election machinery will shift into top gear when President Cyril Ramaphosa unveils the party’s election manifesto at Durban’s Moses Mabhida Stadium on January 12 — four days after the party’s January 8 statement, which will also take place in KwaZulu-Natal.

The ANC’s head of elections, Fikile Mbalula, told a media briefing at the Moses Mabhida Stadium on Wednesday that the party had already embarked on an intensive programme to solicit input from communities around the manifesto through the manifesto forums.

“Ours will be a people’s manifesto carrying the hopes and aspirations of all South Africans in the next five years. We have already been doing that on the ground through the Thuma Mina campaign and the response is quite phenomenal.

“We can also confirm that our Thuma Mina campaign is increasing interaction between the structures of the ANC and communities as exemplified by the visits to various provinces by the NEC led by the national officials,” said Mbalula.

FORMER President Jacob Zuma was on the march through the Pinetown taxi rank on Friday, as the ruling party ratcheted up its campaign toward the 2019 ...
Politics
3 years ago

He said the Thuma Mina campaign train had already been to Gauteng, Mpumalanga, KZN, the Eastern Cape and the Free State. This weekend the campaign will descend on Limpopo.

Mbalula said the January 8 statement would be used to launch the manifesto, which would contain all the commitments and tangible delivery programmes that the ANC would deliver over the next five years - on top of the progress the party had made since the dawn of democracy in 1994.

“We will use the occasion of the January 8 statement to restore hope, unity and renewal as per the injunctions of the 54th national congress held at Nasrec. The programme of the launch of the manifesto will immediately be launched in all the nine provinces following the launch in KZN,” said Mbalula.

He said the 107th anniversary of the ANC was an important occasion for the party to “connect with its rightful owners - the masses of our people”.

“President Cyril Ramaphosa on behalf of the national executive committee will deliver the manifesto. We can confidently say that it’s all systems go with all the preparations. All in all we expecting over 140,000 people in and around Moses Mabhida Stadium,” said Mbalula.

Don't hurt the ANC because of who is in charge - Zuma

Former president Jacob Zuma raised the spectre of factionalism and divisions in the ANC and said people should be loyal to the party and not its ...
Politics
3 years ago

He said the Jaunary 8 statement, which has become part of the ANC tradions, was used to outline the organisatonal programmes and “gives marching orders to all cadres of the movement to work hard to deliver a better life for all”.

“We invite all citizens of South Africa to come to Moses Mabhida on this historic day, not only to celebrate with their movement, the ANC, but also to send a strong message that the ANC is ready for an overwhelming electoral victory in the 2019 and provincial electoral elections.

“We say this not because of arrogance but because our people know that the ANC is a tried and tested leader of society that carries their hopes and aspirations. And that it has always been ready to self-correct when it missteps. We say ours have been the years of the good and the bad and we have seen the bad our people have come out to criticise us - we are prepared to accept the criticism.”

Mbalula repeated the party’s call for unity and renewal which, he said, was at the core of all their programmes and to retain trust with the people of South Africa “at whose behest we continue to exist and lead”.

EFF could shave 10% off ANC support base - poll

The EFF could double its support in next year’s general elections by shaving 10% off the support base of the ANC.
Politics
3 years ago

“We have already adopted various measures which include dismantling and stamping out factionalism and to rebuild operational trust through greater transparency and accountability,” he said.

A poll conducted by the Institute of Race Relations ahead of next year’s general elections has shown that support for the ANC is on course to drop by 10% whereas the DA are faring significantly better with black voters, with 10% of black citizens featured in the poll saying they were backing DA leader Mmusi Maimane, whose party is up from 4% from the last ballot.

The poll also suggested that the EFF will have more than double the number of votes in next year’s elections than what they had in 2014.