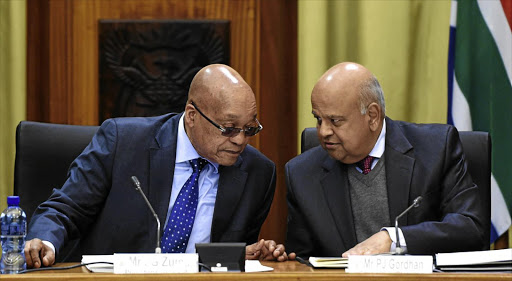 Former president Jacob Zuma fired then finance minister Pravin Gordhan, right, on the pretext of a 'so-called intelligence report' that implicated Gordhan in a plot to undermine the government with the help of international companies.
Image: GCIS

Public enterprises minister Pravin Gordhan believes that his sacking as finance minister in 2017 was a move to halt court processes regarding the closing of Gupta bank accounts.

Gordhan, who was testifying at the commission of inquiry into state capture on Wednesday, described the events leading up to former president Jacob Zuma’s surprise cabinet reshuffle in March last year, which saw Gordhan and his deputy Mcebisi Jonas fired.

Gordhan was on an investor roadshow in London with former National Treasury director-general Lungisa Fuzile when they were summoned back to South Africa by the presidency.

This was only days before the North Gauteng High Court was to hear arguments in Gordhan's application seeking declaratory relief from having to intervene in the banks' closure of Gupta-related accounts.

"One could surmise that the intention was to get rid of us, put in another minister and withdraw the application to the Pretoria High Court," Gordhan told the commission.

Fuzile and Gordhan flew to London on March 26.

"As we literally hit the tarmac at Heathrow, I put my phone on and there was a letter from the director-general in the presidency instructing all of us to return immediately.

"The question was, what do we do with our time? And also Jonas wasn’t with us. Fuzile and I then discussed the message and said we owe a responsibility to the meetings scheduled," said Gordhan.

"For the rest of the day, we said let's meet the investors and interact with the ratings agencies. We then had our flight rescheduled for later that evening."

The next day, Zuma, relying on a so-called intelligence report that implicated Gordhan in an alleged plot to undermine Zuma's administration with the help of international companies, informed leaders of the Communist Party and the ANC of his intention to remove Gordhan.

"I reject and deny these allegations and I never saw the report as a whole," said Gordhan. "This has got some ludicrous suggestions."

I reject and deny these allegations and I never saw the report as a whole. This has got some ludicrous suggestions."

Upon his return to SA, Gordhan said, he made his way to ANC headquarters and met with then secretary-general Gwede Mantashe.

"Mantashe said Zuma would prefer that I resign rather than him firing me."

Gordhan was axed on March 30, four days after he was instructed to return from the roadshow.

Public enterprises minister Pravin Gordhan concluded his testimony at the state capture commission on November 21 2018. Gordhan revealed information about his encounters with the Guptas, among other things.

Gordhan: 'I am not a commodity for sale ... the Guptas learnt that'

Public Enterprises minister Pravin Gordhan has lashed out at his critics, including the EFF,  saying to the Zondo commission of inquiry: “I am not a ...
Politics
3 years ago

Former public enterprises minister Barbara Hogan is on Wednesday expected to testify how Jacob Zuma made it difficult for her to do her job and how ...
News
3 years ago

The Gupta family on Thursday lost a court bid to stop the Bank of Baroda from closing down their last remaining bank accounts in South Africa.
News
4 years ago

After a full day of highly technical arguments the high court in Pretoria has reserved judgment in the urgent application for an interdict preventing ...
Politics
4 years ago

Gordhan’s predicament - was a fake intelligence report to blame?

The Inspector General for Intelligence will be asked to investigate whether a “fake intelligence report” was behind the instruction for Finance ...
Politics
5 years ago