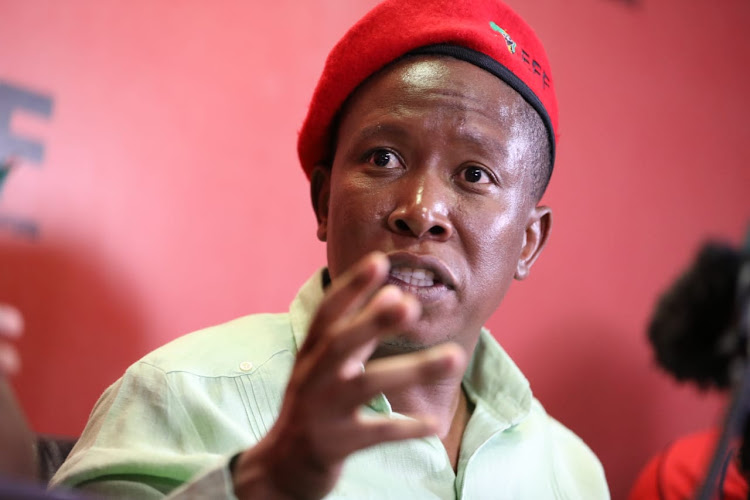 In the wake of sabre rattling by EFF leader Julius Malema directed at journalists, the red berets say they are too busy to meet the South African National Editors' Forum (Sanef).

"Sanef requested a meeting with Malema and his executives following calls by him to EFF supporters to deal decisively with journalists, whose names he mentioned from the stage while addressing a crowd outside the Zondo commission's hearings," said Sanef in a statement.

Following Malema’s remarks, one of the journalists he singled out was physically accosted while shopping and others faced abuse on social media, said the forum.

Sanef said EFF secretary-general Godrich Gardee had written to them on Tuesday, saying the party's schedule was "very tight and fully booked with pre-arranged meetings and activities up until the elections date".

The elections are expected to take place in May 2019.

WATCH | 'If you push me, I push back' - Malema after laying charges against Gordhan

"I am not Nelson Mandela, neither am I [Jacob] Zuma. If you push me, I push back."
Politics
3 years ago

The decision not to meet Sanef came as a surprise as EFF spokesperson Mbuyiseni Ndlozi reportedly confirmed on radio and national television that the party was prepared to meet the forum.

Malema had tweeted that he was prepared to meet on condition that Sanef did not bring what he described as a "racist" white young boy called Adriaan Basson, said Sanef.

Basson serves as the treasurer of the forum and would have been a part of the delegation to meet the EFF.

The forum has indicated that it would seek advice on options available to it to protect journalists from bullying and intimidation tactics by politicians.

"Our council meeting resolved that journalists should feel free to leave press conferences or rallies by political parties if they feel under threat or intimidated," said the forum.

"While we acknowledge Malema's right to criticise the media, we remain gravely concerned about the threats and intimidation of individual journalists – often women – who report critically on the EFF, and the chilling effect this may have in newsrooms. A meeting with the EFF leadership was the first step in Sanef's response to these threats and we believed it was absolutely essential before the elections," Sanef said.

Sanef has also condemned the EFF’s decision to ban Sunday Times reporters from its events.

The forum quoted the 2017 UN General Assembly resolution where member states, including South Africa, collectively condemned "all attacks and violence against journalists and media workers, such as torture, extrajudicial killings, enforced  disappearances, arbitrary  arrest and arbitrary detention, as well as intimidation, threats  and harassment, including through attacks on, or the forced closure of, their offices and media outlets, in both conflict and non-conflict situations".

Cyril Ramaphosa must get out of politics and go back to business, says Julius Malema

Economic Freedom Fighters leader Julius Malema has called on President Cyril Ramaphosa to return to the business world from politics, saying "he is ...
Politics
3 years ago

Deputy chief justice Raymond Zondo has cautioned the Economic Freedom Fighters and its leader Julius Malema against intimidating witnesses and ...
News
3 years ago