The public enterprises minister says the president will soon announce a task team to create a plan for the next five years, to help turn Eskom around. 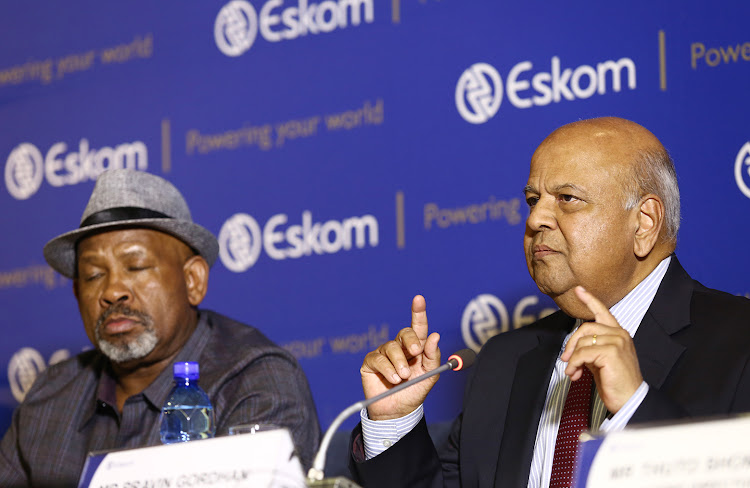 As the country faces daily planned power cuts, which are seen as a threat to the economy, all Eskom managers have been ordered to cancel their holiday leave.

The managers would be deployed to individual power stations to get a sense of what’s happening on the ground, public enterprises minister Pravin Gordhan told the media at a briefing at the financially dire state utility's offices in Johannesburg on Thursday.

He said the period from December 15 to January 15 is usually when demand drops, and no power cuts — Eskom's “load-shedding” — are expected in that time.

He said President Cyril Ramaphosa would soon be announcing a task team to configure a road map for the next five years to help turn the troubled company around.

“This was one of the centres of state capture,” Gordhan said.

Business Day reported on Wednesday that Eskom would ask the government to take R100bn of its debt onto its own balance sheet.

While the move would give Eskom relief, it would add another two percentage points to the government’s debt-to-GDP ratio and could be seen as negative by credit-ratings agencies.

Gordhan said on Thursday that there was nothing definite with regard to the R100bn figure.

Currently, Eskom operates thanks to a R350bn debt guarantee by the government, which has been flagged as the biggest risk to the fiscus.

Eskom, which supplies most of SA’s electricity, has massed R419bn worth of debt over the past 10 years due to its huge capital build programme. It is now unable to pay interest costs from revenue earned and must borrow to service its debt. Interest costs over the next three years are projected to be R250bn.

Overall debt is projected to rise to R600bn over three years if debt levels are not contained.

Gordhan dismissed suggestions that the government would take a decision to privatise Eskom, saying this came from people trying to cause political mischief.

He said the issue was about finding the money to bridge the gap between revenue and expenditure.

With regard to the construction of the two mega power stations, Medupi and Kusile, Gordhan said forensic investigations had already signalled that contractors had been falling short in design and quality.

“There’s going to be tough talking between the board and management on one hand, and with companies. Somebody is making money from the doubling of costs in Medupi,” Gordhan said.

We didn't ask for it but it's here.This is how you can survive the dark times during loadshedding.
News
3 years ago

Eskom, don't keep us in the dark about festive season, plead businesses

The Durban Chamber of Commerce and Industry hopes Eskom will provide clarity on its loadshedding plans before the start of the festive season.
News
3 years ago

Experts have warned that SA should brace for several years of power cuts, which could drag the country into a “death spiral”.
News
3 years ago