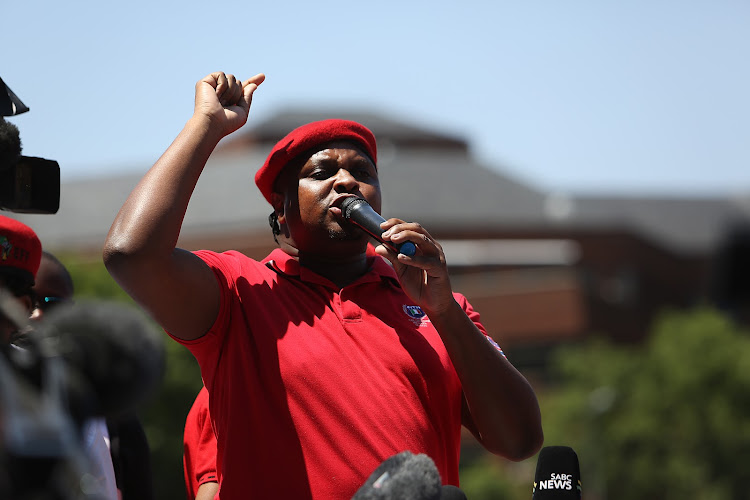 EFF deputy leader Floyd Shivambu has rubbished a Daily Maverick report that claims he used his influence to obtain a home loan from VBS Mutual Bank to buy his parents a house.
Image: Alon Skuy

Did EFF deputy president Floyd Shivambu “use his influence” with the management at now collapsed VBS Mutual Bank to secure a home loan to buy a house for his parents?

The Daily Maverick’s investigative unit, Scorpio, reported on Monday, December 10 2018, that despite not qualifying for a loan, the bank gave Brian Shivambu’s company, Sgameka Trading, a R1,46m home loan after his brother, Floyd, allegedly had private discussions with VBS chair Tshifhiwa Matodzi. The discussions were attributed to “leaked emails”.

The house in Johannesburg was registered to Sgameka as an asset, effectively funded by the country’s poor and vulnerable. Their parents allegedly moved into the house in October 2017 and stayed there for a year.

Floyd Shivambu responded to the investigation, saying: “Fraudulent activities are dealt with by the criminal justice system and not some imaginations of a lousy journalist… I think your narrative is bullshit and pure drivel driven by narrow obsession.” He asked for proof that he had received millions of rands from VBS.

So now the money you allege I got is R2.4 million? What happened to the R10 million? Since when are mortgages illegal? You are so desperate for relevance and you are dismally failing. As I said, good luck in your wild goose chase! https://t.co/GzGltjaHKE

Brian Shivambu said he had applied for a housing loan. “I was given the loan and I am paying for it.”

EFF leader Julius Malema on Tuesday said the party had found no evidence that its deputy president Floyd Shivambu had received money linked to VBS ...
Politics
3 years ago

EFF leader Julius Malema said in October 2018 that the party had found no evidence that Floyd Shivambu had received money linked to VBS Mutual Bank.

TimesLIVE reported at the time that a forensic report had accused Brian Shivambu of having received R16m from VBS as part of large-scale looting that allegedly drove the bank into a crisis‚ leading to it being placed under curatorship.

Malema said then that allegations against Floyd and Brian Shivambu were part of efforts to “discredit the EFF”.

Malema called on law enforcement to move against those mentioned in Advocate Terry Motau’s report and said the EFF was not going to institute any disciplinary measures against Floyd Shivambu. He said Shivambu had shown his bank statements to party leaders.

“Everyone is blaming the EFF as if we are the ones who took R2bn of VBS [money]. We are asking‚ where was the Reserve Bank? The Reserve Bank is the police of banks‚ so why have the face of Brian Shivambu as the face of VBS looting?”

DA MP Kevin Mileham has opened a criminal case in connection with the "looting" at VBS Mutual Bank against the EFF, party leader Julius Malema and ...
Politics
3 years ago

The Hawks told parliament's finance committee on Wednesday that statements from at least 65 potential witnesses had been obtained as part of its ...
News
3 years ago