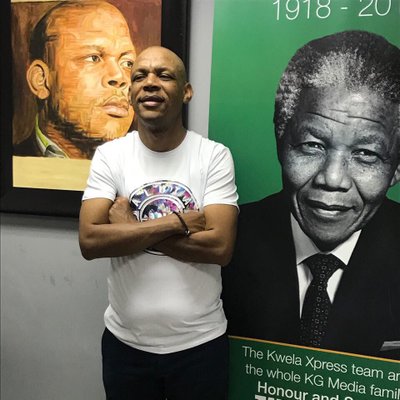 The ANC Women's League has called for the party's national spokesman, Pule Mabe, to be suspended pending the outcome of a sexual harassment case against him.
Image: Pule Mabe via Twitter

The ANC Women's League said it believed that party spokesman Pule Mabe should stop reporting for duty until accusations levelled against him have been investigated and he has been cleared.

"The ANC must … consider suspending Comrade Mabe from all ANC duties pending the outcome of the case. All shall be equal before the law and we are hoping for a fair and just internal disciplinary hearing as no one is above the ANC," Meokgo Matuba, the league's secretary general, said in a statement.

The sexual harassment accusations were made by Mabe's personal assistant, according to reports.

The African National Congress (ANC) on Monday confirmed that an “internal grievance” has been lodged against spokesman Pule Mabe.
Politics
2 years ago

The ANCWL said it condemned the incident and threw its weight behind the victim - but stressed that it took into account the principle of "innocent until proven guilty".

"Based on media reports, we are led to believe that a case has been reported to the ANC leadership and we urge the ANC to move with speed and deal with [these] allegations in unbiased, impartial and very objective manner," the league said.

The party confirmed on Monday afternoon that it was investigating the complaint against Mabe, but would not comment further until the matter had been dealt with.

Details of the alleged sexual harassment and mistreatment by Mabe were documented in a letter of grievance written by the 26-year-old victim to the ANC's deputy secretary general, Jessie Duarte.

TimesLIVE has seen a copy of a 14-page letter in which the woman details her experience working with Pule from July 2018.

The public relations graduate said she was never interviewed for the job and was informed verbally by Mabe that she would be starting as his PA on August 1 2018. This discussion was held at St George's Hotel just days ahead of the ANC Gauteng's provincial conference, she said.

The woman said she first felt uncomfortable on her very first day on the job, which was days earlier than she was scheduled to start.

She said the first incident happened at the St George's Hotel, where Mabe had been in her hotel room, which had two double beds. They were going through some work when he asked that she move from the bed she was sitting on to the bed that he was lying on.

"I firstly refused and said I will read out what was on the exam pad. He then said he needed to see [what was on the exam pad] while at the same time I call out what was written there. I then did as he said, I was so uncomfortable such that I lasted for like 2 minutes and went back to the bed I was on at first. He invited me again and insisted on his story of wanting to see what was written on the paper," said the woman.

The woman added: "I couldn’t wait until he was finished so that I would go back to the bed I was on and immediately when he was done I jumped off the bed to the one I was on earlier alone. I began making remarks about being tired and so forth, I can’t recall the time properly but it was too late, after a long while he then gave in and left the room. Finally, I was to get my chance to rest, even though it was to be for a few hours."

She said Mabe came back the following night and had his dinner in her room. He insisted on completing his assignment from her room, saying he would fall asleep should he return to his room and be alone.

"I'm sure you’ll ask yourself, DSG [deputy secretary general Jessie Duarte], why didn’t I tell him I needed space and to rest? Well, I wanted to but this was my first day of work, I had not yet signed the contract, the money that paid the room was his and I don’t have [a] car to go back home neither do I have money to catch a cab. I was in a much-compromised position," she wrote.

The woman claimed that on that night, Mabe had, approximately three times, switched off the lights as she dozed off on her bed, but she awoke and asked that they be kept on. Eventually, she said, she fell asleep.

"[This was until]… I felt so hot and woke up. To my surprise, the lights were all completely off, blankets on me and comrade Pule’s legs on top of my body. I immediately snapped and asked why he was in my blankets, his response what that he is taking a break from completing his assignment, to which didn’t make sense at all and my heart began beating so fast because a lot of things occupied my mind; first was 'how could someone I regarded as a brother, leader and comrade do this? Wanting to get into bed with me?

'Isn’t this man supposed to be my boss?' and I then remembered the previous night, what sprung to my mind when I was asked to sit closer to him in an inappropriate manner that an employer and an employee shouldn’t find themselves in. Worse, I hadn’t signed my contract, and quite frankly, this wasn’t what I would be signing my contract for (to give out sex in return of a job)," the woman said.

"I had to think over and over again about what my next move will [be], in order to keep my job that I had not signed a contract for and to equally send a strong message of my intolerance of such conduct and sexual transactions, worse with a man I was meant to call a boss. I argued that I do not like sharing a bed, worse with a man and in my house I still don’t share a bed (this was obviously a lie; but I had to make up this considering what I’ve already mentioned earlier), he asked me how do I then cope when I sleep with my boyfriend, and my response was 'I never share a bed with him' (this was obviously another lie)."

The woman claimed to have stayed up until 5am when Mabe finally decided to leave her room.

"I lost so much of respect for him and I felt so much uncomfortable around him. I just couldn’t wait to leave the place."

The woman said she finally signed her contract on August 2 but spent days without clarity on what her job description would be.

She said the next incident happened on August 21 when they were in the North West. She claimed that Mabe had booked them two separate rooms, which were adjoined by a kitchen.

She said on that evening, she woke up to find Mabe in her room.

"I opened my eyes and covered my head. I saw him plug his power bank to the charger and he stood there for a while as if he was trying to think of his next move; my heart couldn’t stop beating so hard, as I was thinking of what could possibly happen and how [I] was going to escape the situation," she said.

Nothing else happened that night.

In the letter, she detailed how on numerous occasions she was embarrassed by Mabe, who allegedly shouted at her and accused her of incompetence, despite her not receiving training for her post.

The woman further alleged that Mabe spoke ill of her, even expressing that he suspected that she was having sexual relations with members of the leadership.

"I have lived with pain and a heavy heart because I for the longest didn’t know who to run to. I have spent days crying myself to sleep. I haven’t looked forward to coming to work, not unless I know he was not going to be around, in my own space. When I wanted to do something, I'd feel there was something wrong and felt like he was watching over and next thing I would be shouted at," she continued.

The woman said on November 16 she was called into a meeting with Human Resources, where she was informed of a salary cut.

"From what I was getting, my salary was cut to R15,000 before deductions," she said.

She added that HR had informed her not to report the matter to the party's leadership but she "refused to be silenced".

The ANC has since released a statement, saying it had established a grievance panel which would hold hearings into the allegations next week.

"Until the finalisation of these internal processes, the ANC will not comment on the substance of these allegations," the party said.