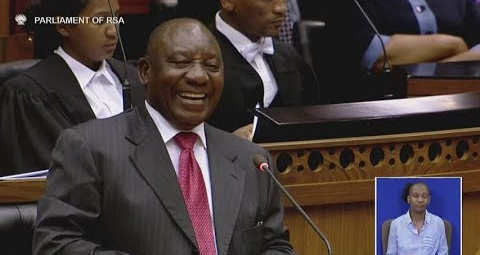 He said the only way of boosting the country’s investment grade was through inclusive economic growth, which needed collaboration from various sectors.

Ramaphosa was speaking during an interview with Radio 702’s Xolani Gwala on Thursday.

Being president 'drains you': Ramaphosa

President Cyril Ramaphosa said on Thursday that his stint as president was much more difficult than he initially thought it would be.
Politics
3 years ago

“A number of countries have been downgraded because of the economic situation they face. We are still regarded as investment grade and we are working very hard to upgrade ourselves. Once we are downgraded, our debt becomes much more expensive,” Ramaphosa said.

“We want to get out of this downgrade situation and upgrade ourselves. We can only do that through inclusive growth, including more of our people in economic activity. We are working very hard. I am defining my role as president of the republic as being one that will be underpinned by collaboration.”

Ramaphosa said the government was dealing with a “plethora” of issues raised by would-be investors.

“We are working on concrete plans. We are laying the foundation to deal with issues that have been raised as matters of concerns…We are dealing with a plethora of issues that would-be investors have raised with us,” he said.

Ramaphosa also issued a stern warning to those accused of corruption who are embarking on a fight back campaign against the state that government is “determined to clean up”.

“The real issue that we should be pleased about is that we have seen where the rot is, we are cleaning out the rot. We are beginning to see a wave of change…We are going to have the courage and the determination to clean up,” Ramaphosa said.

“That fight back and that push back is never going to succeed. The people who are fighting back need to know very clearly our determination is resolute.”

“Eskom is a very important company in the life of our country. Tomorrow I’ll be announcing a task team that will look at Eskom in terms of its current difficulties but we are also going to look at the business model of Eskom, the funding model of Eskom going forward and how we should structure Eskom,” he said.

Ramaphosa also spoke about Board resignations at the SABC.

“We are now looking at how best we can give them the assistance they need (SABC). The members themselves came forward and wrote letters saying we want out. It’s a little bit difficult to say I’m not going to release you. What we are now faced with is a situation where we now need to assess the situation,” he said.

“We want to see a strong SABC, a well functioning SABC and a well-resourced SABC. Where we’ve got to ensure there is prudence and independence, we will do so.”

'We support Ramaphosa economically, but politically we have other interests'

The ANC is a microcosm of South Africa and all its elements - including thugs.
News
3 years ago