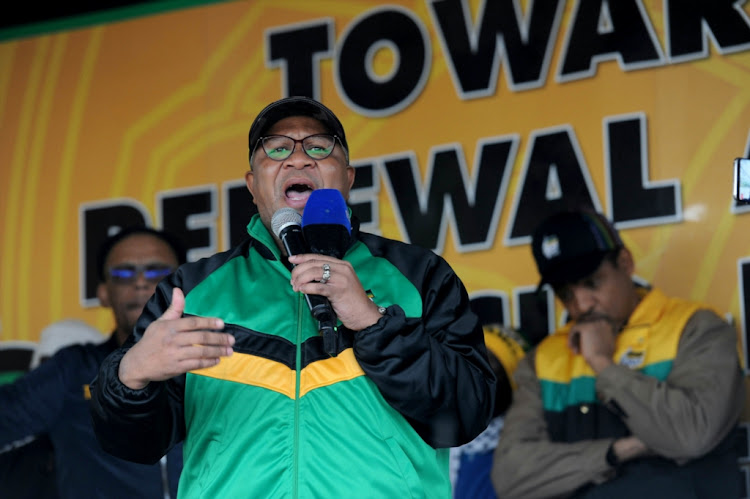 ANC head of elections Fikile Mbalula during the launch of the party’s Thuma Mina campaign in 2018. Mbalula said on January 3 2019 that the ANC's election manifesto will be "a thoughtful consideration of the needs of the people".
Image: Gallo Images / Sowetan / Veli Nhlapo

ANC head of elections Fikile Mbalula says the party’s election manifesto, which is to be launched at a rally in Durban, is not a “bucket of promises” but a thoughtful consideration of the needs of the people.

On Thursday, the party briefed the media about a week of activities planned in and around Durban to commemorate the party’s 107th birthday next Tuesday and the launch of its election manifesto on January 12.

Mbalula said ANC president Cyril Ramaphosa would give a proper account of what the party had done and what it planned to do while “acknowledging the challenges we had”.

“There were mistakes that were committed but that’s why the ANC has been on the path of recovering lost ground,” he said.

Mbalula conceded that there had been a perception that the ANC and its leaders were arrogant and did not deal with challenges raised and protested about.

Mbalula said Ramaphosa would be frank in his address, saying: “The road has not been easy and we learnt through our mistakes”.

The ANC is expecting that the main rally at the Moses Mabhida stadium will attract over 85,000 supporters from across the province.

Ramaphosa will address the main January 8 celebrations in Inanda, eThekwini, while other ANC leaders will address mini rallies in all 11 regions in the province.

Next Friday, a preview of the manifesto will take place at the Inkosi Albert Luthuli International Convention Centre.

The ANC will launch its elections campaign early in January as it tries to prevent its national support dropping below the 59% predicted in some ...
Politics
3 years ago

ANC nominates Jacob Zuma as a member of parliament

Jacob Zuma is set to make make a sensational return to politics, if ANC members have their way. The former President has been nominated on the list ...
Politics
3 years ago