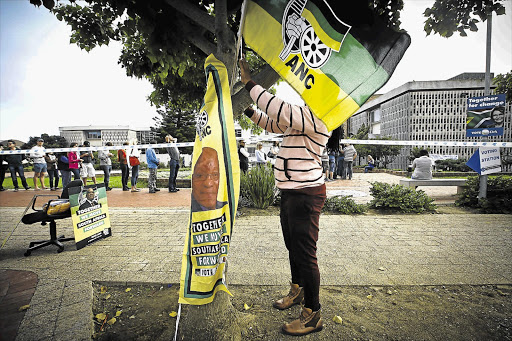 The ANC said on Sunday that members who foster division would not be included on its list of representatives to the national assembly and provincial legislatures.
Image: Thomas Holder

ANC members and leaders who have been involved in “fostering divisions and conflict” in the party will not be allowed to be included on the list of representatives to the national assembly and provincial legislatures.

The ANC held its national list conference in Durban's upmarket Umhlanga suburb, where it was decided to reconsider the criteria of its lists of public representatives - which will now include a strict vetting process.

Ramaphosa set to confront Zuma on his 'divisive' comments

President Cyril Ramaphosa is set to confront his predecessor, Jacob Zuma, about his public comments that contradict ANC policy.
Politics
3 years ago

Initially, ANC deputy secretary general Jessie Duarte said the party would only consider removing people who were criminally convicted and sentenced. But on Sunday, the party said they had broadened the criteria to disallow candidates who had a history of ill-discipline and corruption.

“The conference was emphatic that in instances where the adopted principles and guidelines are not met, it will not hesitate to intervene,” Legoete said.

He said the party had decided to subject the lists to a vetting process to check whether each candidate met the requirements of being an ANC public representative.

“The ANC is under no illusion that its lists must enhance its integrity, with a calibre of public representatives that are capable of advancing the electoral mandate of the ANC,” the party said in its statement after the list conference.

The party agreed to continue its practice of ensuring every second name on the lists was female, but lowered their requirement of experience.

Once the lists are fine-combed, the ANC’s national executive committee will adopt them and submit them to the Independent Electoral Commission before the 2019 general elections.

The ANC is briefing the media on the outcomes of the party's list conference, where it will decide who to send to parliament and the various ...
Politics
3 years ago

ANC Deputy secretary general Jessie Duarte on Friday said only people who had criminal convictions will be excluded from the ANC lists to parliament ...
Politics
3 years ago

Ahead of the next national election planned for May this year, currently six in every ten registered voters (61%) say they will vote for the ruling ...
Politics
3 years ago