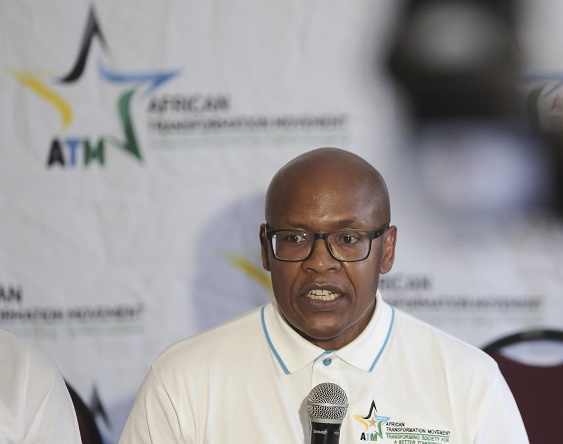 Mzwanele Manyi lambasted the ANC at a media conference to announce he had joined the African Transformation Movement, on January 9 2019 at the Joburg Theatre.
Image: Alaister Russell/The Sunday Times

Former cabinet spokesperson Mzwanele Manyi has been unveiled as the new policy chief of the pro-Jacob Zuma party, the African Transformation Movement (ATM).

Manyi recently divorced the ANC, his long-time political home, accusing the governing party of having reached "a saturation point".

On Wednesday he was paraded as member of the ATM national executive committee and head of policy and strategy.

During a press briefing at the Joburg Theatre in Braamfontein, Manyi launched a scathing attack on the ANC which he has been a member of for almost three decades.

According to Manyi the ANC  "is tired, fatigued and has lost its moral compass".

A beaming Manyi expressed his confidence that the ATM would take over the reins after the general elections.

However, he cleverly sidestepped a question on whether he had ambitions of being a member of parliament through the ATM, saying "that is up to the party".

It's official, Gupta vendor finance beneficiary Mzwanele Manyi has found a home in the ATM.
Politics
3 years ago

The ANC is captured by imperialist forces, said Manyi, and thus should not be trusted.

"Let's allow the ANC to retire and usher in younger, fresh and uncaptured blood.

"Let's allow those without the Codesa baggage to lead and ATM is new and has no baggage of history of corruption or unfulfilled promises."

Manyi said he believes the country needs fresh ideas and young blood to take over the baton without "Codesa baggage".

And this, according to him, is what the ATM would deliver.

Said Manyi: "ATM values are sound and universally acceptable. The ATM is funded by its own members, not wealthy business people with their own agendas.

"ATM is the breath of fresh air led by people who prioritise peace in dealing with others."

The decision to dump the ANC, he said, was triggered by ANC's ways in 2018, a year in which Manyi believes the party was found wanting.

Among Manyi's gripes with the ANC, he believes the party deliberately "distorted" the resolution taken at its Nasrec conference in 2017 to expropriate land without compensation.

Moreover, he charged, the ANC last year abandoned the Nasrec resolutions for the nationalisation of the Reserve Bank and the formation of a "state bank".

"To put it mildly, 2018 was the most disastrous year in the transformation project of SA under the watch of the ANC," fired Manyi.

This happens to be the year when president Cyril Ramaphosa assumed power following the removal of Jacob Zuma whom Manyi supported and defended at every turn.

Manyi said his decision was not sour grapes after his Nasrec preferred candidate Nkosazana Dlamini-Zuma was defeated by Ramaphosa for the ANC top job.

"Had NDZ won and did the same things the ANC did last year, I would have come to the same decision. I am an issue-based person I am not about individuals," he said.

Former government spokesperson and owner of the erstwhile ANN7 news channel and The New Age newspaper, Mzwanele Manyi, is poised to jump ship from ...
Politics
3 years ago