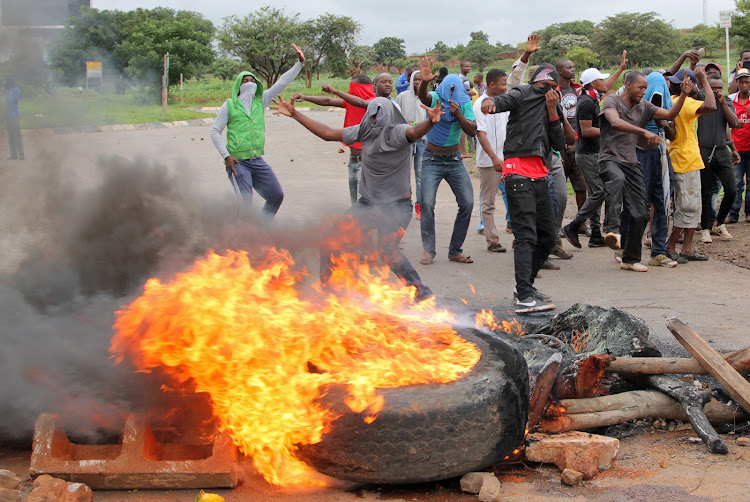 Protesters erected a burning barricade during protests on a road leading to Harare, Zimbabwe, on January 15 2019.
Image: Reuters/Philimon Bulawayo

The Democratic Alliance has threatened to approach the International Criminal Court (ICC) if President Cyril Ramaphosa fails to intervene directly to stop the ongoing human rights violations by the Zimbabwean government.

The DA called on Ramaphosa on Sunday to reconsider his “quiet diplomacy 2.0” and advise Zimbabwean president Emmerson Mnangagwa to stop the military clampdown on civilians.

If Ramaphosa failed to do so, the DA would be left with no option but to approach the ICC to consider a preliminary investigation into these violations as outlined in the Rome Statute, the party said on Sunday.

“The DA strongly believes that the human rights crisis currently obtaining in Zimbabwe is of sufficient gravity to warrant an ICC investigation because, according to the Zimbabwe Human Rights NGO Forum, at least 12 people have been killed, 78 shot at and 240 faced assault, torture, inhumane and degrading treatment,” said Stevens Mokgalapa, the DA’s shadow minister for international relations and cooperation.

He added: “President Ramaphosa and his government seem intent on sitting on their hands over the Zimbabwe crisis in much the same manner as Thabo Mbeki’s failed diplomacy. In 2008, people were attacked and murdered with impunity in another state-sanctioned military clampdown targeting innocent civilians after a disputed election.

“Mbeki’s silence only served to worsen the human rights climate in Zimbabwe and led to a collapse of the economy, whose consequences are still being felt to this day with thousands of Zimbabweans flocking to South Africa to seek economic refugee.

“The DA will not stand by while Ramaphosa repeats a ‘Quiet Diplomacy 2.0’ strategy that is sure to produce the same results as Mbeki’s ill-thought foreign policy.”

Zimbabwe crackdown a sign of things to come - presidency

The crackdown last week on protests in Zimbabwe is a foretaste of how the government will respond to future unrest, the president's spokesman said, ...
News
3 years ago

Mokgalapa said that like the ANC, the Zanu-PF government was “quite simply the same bus filled with empty promises being driven by a different driver who has no power to steer the party in the right direction”.

“The very same people who terrorised Zimbabwe under Robert Mugabe are still in charge under Mnangagwa. The people of Zimbabwe were promised a new dawn when Mugabe was ousted, much like South Africa when Jacob Zuma stepped down. Both have proven to be myths,” he added.

“The era of comradeship between Ramaphosa’s ANC government and Mnangagwa’s Zanu-PF government, while human rights are being trampled on with impunity, is over," said the DA spokesman.

"President Ramaphosa is faced with an easy choice: either he intervenes to stop civilian abuse by the military in Zimbabwe or his government will be one of the parties that will answer to the ICC on why they failed to act to stop the human rights violations.”

Neighbour in trouble asked SA for bailout of $1.2bn on Boxing Day
Business Times
3 years ago

SA should be ready to help, but must not intervene in a problem Zimbabwe has to solve itself

Zimbabwe, the running sore that's pretty much been left alone to fester for almost two decades, is once again threatening to become a tinderbox that ...
Opinion & Analysis
3 years ago