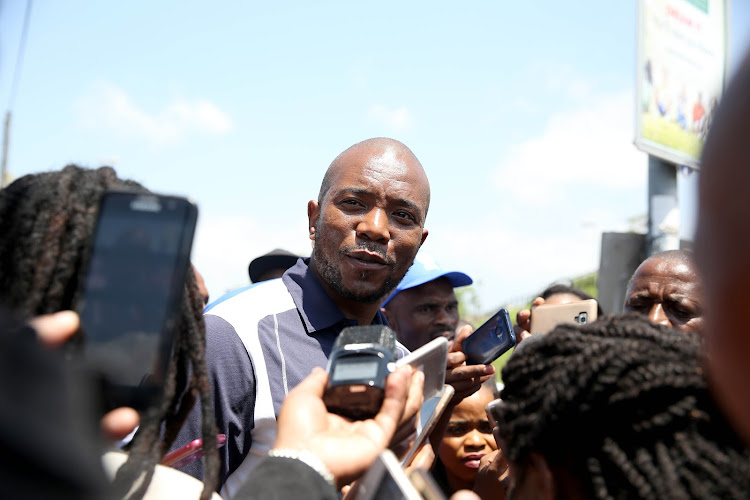 DA leader Mmusi Maimane briefs journalists after his election campaign walkabout in Umlazi. He says the DA's manifesto will unveil plans to put a job in every home.
Image: THULI DLAMINI

DA leader Mmusi Maimane says damning evidence by former Bosasa COO Angelo Agrizzi at the Zondo commission shows that the issue was not only about former president Jacob Zuma but rather about the ANC as a corrupt organisation.

"The Bosasa claims demonstrate that this issue was just not about Jacob Zuma. It shows the fact that the ANC is a corrupt organisation and what my call is, is that we need 15 years [in jail] for corrupt politicians.

"I hope all the people who have been implicated in the Bosasa debacle find themselves in jail.

DA leader Mmusi Maimane has remained defiant about the party's refusal to remove its controversial billboard bearing the names of people who died ...
Politics
3 years ago

Maimane was addressing the media during his campaign to garner support for the DA in Umlazi, south of Durban, on Wednesday ahead of the final voter registration weekend.

He said if he was President Cyril Ramaphosa he would have already fired environmental affairs minister Nomvula Mokonyane after she was implicated in the alleged Bosasa graft scandal.

Bosasa's former COO, Angelo Agrizzi revealed during his testimony at the Zondo commission of inquiry that Mokonyane was a beneficiary of monthly payments of R50,000, with groceries, expensive alcohol and meat delivered to her every year for Christmas.

But Mokonyane has denied Agrizzi's allegations and any wrongdoing. The ANC has also come to her defence, saying it will not take action against her and its members who have been implicated in bribery and corruption by Agrizzi.

Said Maimane: "What’s more crucial is that we must never lose track of the already confirmed allegations. The things that we know. We have to ask the question: why has there been no NPA investigation? We have to ask the question: why is Nomvula still a member of cabinet? Why are all these allegations that are surfacing now as if they are new revelations to President Cyril Ramaphosa?"

"If I was in Ramaphosa's shoes, I would have fired Nomvula Mokonyane immediately. I would have proceeded to ask the ANC members to do the honourable thing. Let’s get the NPA to investigate and let’s lock up the criminals rather than sending them to parliament."

DA leader Mmusi Maimane is writing his party’s manifesto on the back of an envelope, if a Twitter post on Tuesday is any guide
Politics
3 years ago

Maimane also gave a sneak preview of what would be contained in the DA manifesto.

"The gist of our message is that we want to build South Africa for all. A country where all citizens regardless of the colour of their skin can stand together and work together. We want to build an economy that continues to create jobs so as to give people fair access to work. Our manifesto will speak about how we plan to put a job in every home.

"We want to speak further about how we secure our borders to make sure all citizens and noncitizens are registered properly. We want to make sure that there is an honest and professional police service so that ultimately our citizens are not living in danger. Finally, we want to give 15 years for those people who are corrupt, and deliver basic services faster and much more aggressively to our citizens. That’s what this election is about.”

"This is important. It's important that we ensure transparency and that the process is handled well. What’s absolutely important is that it’s got to safeguard opposition politics because we’ve known for far too long that the ruling party has ways they use state resources. They use social welfare to be able to campaign.

"Therefore, this piece of legislation must be able to ensure that it secures the rights of everybody, it has to ensure that ultimately transparency is upheld but furthermore that opposition politics are maintained," he said.

The Democratic Alliance (DA) in Kwazulu-Natal expressed disappointment at the response by police when it opened a case of vehicle theft on Sunday.
News
3 years ago

The Democratic Alliance has threatened to approach the International Criminal Court (ICC) if President Cyril Ramaphosa fails to intervene directly to ...
Politics
3 years ago

Lawyers representing the Democratic Alliance have written to President Cyril Ramaphosa asking him to “immediately” institute an audit into government ...
Politics
3 years ago