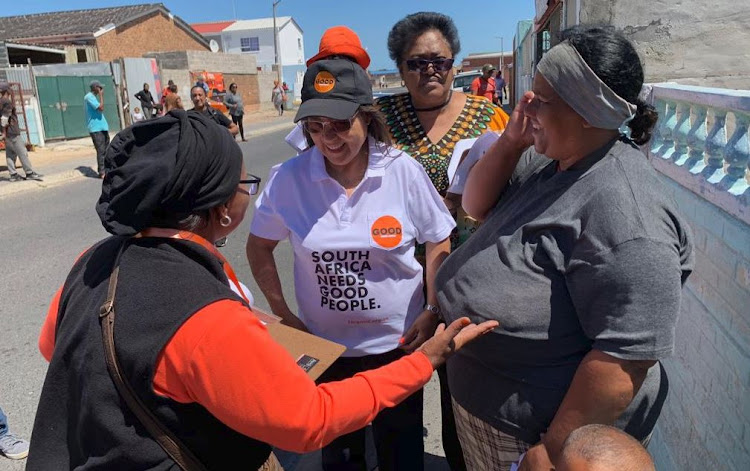 Patricia de Lille, leader of the Good party, meets voters in Mitchells Plain on January 25 2019. She says the DA is claiming she is still a DA member.
Image: Twitter/Good

Patricia de Lille, the leader of the Good party, says she will complain to the electoral commission that the DA is using her name in its attempts to win votes.

De Lille, who left the DA when she stepped down as mayor of Cape Town at the end of October 2018, said she was in Mitchells Plain on Friday encouraging voters to register this weekend when she heard that the DA was taking her name in vain.

"I was shocked to hear from a number of households that the DA is telling voters that I am still a member of the DA," said De Lille.

"The residents were confused and shocked when I arrived today and asked them to support Good. I had to explain to them that they had been lied to. The DA's conduct in using my name, and lying to residents, is disgusting and dishonest."

Here is a resident telling me about the DA and their lies. pic.twitter.com/CjcBqcCdzR

De Lille stepped down as mayor after a lengthy conflict with the DA, and launched Good several weeks later. She has since unveiled her team of leaders, which includes several politicians who left the DA and the city of Cape Town with her.

"The hypocrisy of the DA knows no bounds. They spent two years and about R2m in legal fees trying to get rid of me for no legitimate reason," De Lille said on Friday.

She said she would report the DA’s alleged misrepresentations to the electoral commission and ask for an explanation from party leaders.

Former Cape Town mayor Patricia de Lille’s new political party Good has already won the support of about 60,000 people across the country with a ...
Politics
3 years ago

Five of the biggest newsmakers of 2018

The biggest newsmakers in 2018, from state capture to controversial pastors.
News
3 years ago