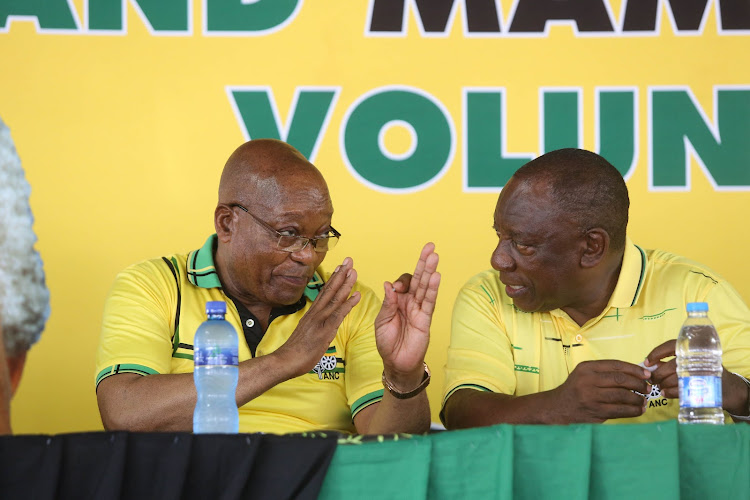 Former president Jacob Zuma on Tuesday hit back at his successor President Cyril Ramaphosa, saying suggestions that his term in office was "nine wasted years" were not true.

Ramaphosa was quoted last week in Davos as having spoken about "nine wasted years" under Zuma. He was addressing potential investors.

On Tuesday afternoon Zuma tweeted a link to a Twit Longer, in which he dismissed the comments attributed to Ramaphosa.

Zuma said when ANC leaders criticised his term in office, they were "pointing the finger at themselves", in reference to the fact that Ramaphosa was his deputy.

The main problem with some ANC leaders is that they have turned into "sycophants".
News
3 years ago

Zuma listed a number of his "successes", his record on fighting HIV/Aids, the drafting of the National Development Plan, the increased number of social grant recipients, the construction of two universities in Mpumalanga and the Northern Cape, and introduction of free tertiary education for poor students.

"It is with unease that we must bear witness to certain recent comments and attitudes that, if not questioned, threaten to become the prevailing wisdom and even the new status quo in the ANC. Because we are hearing, now, of the country’s 'nine wasted years', wrote Zuma.

"When referring to the past decade as 'wasted years' in this way, these critics saying so within the ANC might be quick to point out they are not only speaking in reference to me. They may even say they are pointing the finger at themselves, or at the movement in general, but I must still caution against this new trend, and not for my sake."

Then Zuma, in a clear swipe at Ramaphosa, said he had never criticised his predecessor, Thabo Mbeki, when he had taken over as president.

Zuma believes it was ill-advised to "subscribe to the lie" that the past decade went to waste, especially for the ANC on the eve of the general elections.

Said Zuma: "It was the ANC in charge, and we should not be taking such a message of defeatism to those who have given us their votes, and trust.

"I do not believe we have betrayed that trust and I remain proud of much of what we and the country achieved over the past decade. Could we have done more? Yes. Could it have been better? Yes. Was it a wasted decade? No."

Among successes recorded during his reign, Zuma listed the following:

Former president Jacob Zuma surprised many when he launched his Twitter account, which has boomed and become a social media favourite for many.
Lifestyle
3 years ago

Mzansi weighs in on that Mabalula and Zuma Twitter convo

Tweeps weigh in on Mbalula and Zuma's Twitter exchange.
News
3 years ago

'We will treat Ramaphosa the same way we treated Zuma': Malema on Bosasa, Sona and Zimbabwe