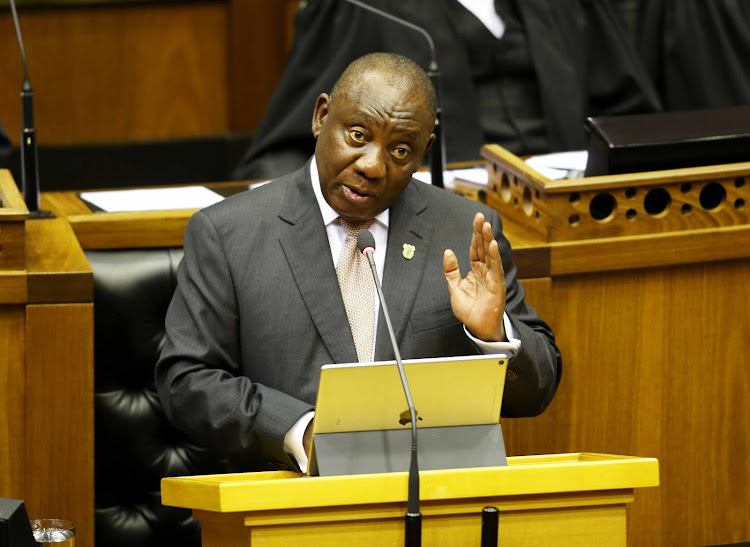 President Cyril Ramaphosa delivers his State of the Nation Address in Parliament in Cape Town on February 7 2019.
Image: Esa Alexander

President Cyril Ramaphosa on Thursday night delivered his second State of the Nation Address and these were some of his key quotes:

“As government, we have decided that the requirement for work experience at entry-level in state institutions will be done away with. Our young people need to be given a real headstart in the world of work. They should not face barriers and hindrances as they seek to find work.”

“Security of energy supply is an absolute imperative. Eskom is in crisis and the risks it poses to South Africa are great. It could severely damage our economic and social development ambitions. We need to take bold decisions and decisive action. The consequences may be painful, but they will be even more devastating if we delay. To bring credibility to the turnaround and to position South Africa’s power sector for the future, we shall immediately embark on a process of establishing three separate entities – Generation, Transmission and Distribution – under Eskom Holdings.”

These were some of the highlights from President Cyril Ramaphosa’s 2019 State of the Nation Address.

“Over the next six years, we will provide every school child in South Africa with digital workbooks and textbooks on a tablet device. We will start with those schools that have been historically most disadvantaged and are located in the poorest communities, including multigrade, multiphase, farm and rural schools. Already, 90% of textbooks in high enrolment subjects across all grades and all workbooks have been digitised.”

“We will give effect to our commitment to build human settlements in well-located areas that bring together economic opportunities and all the services and amenities that people need. The Housing Development Agency will construct an additional 500,000 housing units in the next five years, and an amount of R30bn will be provided to municipalities and provinces to enable them to fulfil their respective mandates.”

“This year, we will take a significant step towards universal access to quality healthcare for all South Africans. After extensive consultation, the NHI bill will soon be ready for submission to Parliament. The NHI will enable South Africans to receive free services at the point of care in public and private quality-accredited health facilities. By applying the principle of social solidarity and cross-subsidisation, we aim to reduce inequality in access to healthcare.”

The National Prosecuting Authority (NPA) will set up a special unit to deal with state capture prosecutions, President Cyril Ramaphosa announced on ...
Politics
2 years ago

“South Africa has extremely high levels of substance abuse, which feeds crime and violence against women and children, it deepens poverty and causes great hardship and pain for families. As government, we continue to roll out interventions to address social ills tearing our communities apart, such as alcoholism and substance abuse. Knowing, as we do, that there are strong linkages between substance abuse, drug trafficking, crime and insecurity in communities, we are focusing on tackling this problem at its source through prevention programmes targeting vulnerable persons especially our youth. We are resolute that all taverns, shebeens and liquor outlets near school premises must be shut down.”

“The action we take now to end corruption and hold those responsible to account will determine the pace and trajectory of the radical social and economic transformation we seek. Evidence of criminal activity that emerges [from the commissions of inquiry] must be evaluated by the criminal justice system. Where there is a basis to prosecute, prosecutions must follow swiftly and stolen public funds must be recovered urgently. To this end, we have agreed with the new National Director of Public Prosecutions that there is an urgent need to establish, in the office of the NDPP, an investigating directorate dealing with serious corruption and associated offences. In broad terms, the directorate will focus on the evidence that has emerged from the Zondo Commission of Inquiry into State Capture, other commissions and disciplinary inquiries.”

WATCH | 'If you become president, I'll sing for you': Ramaphosa charms Malema at #Sona2019

President Cyril Ramaphosa had parliament in stitches when he claimed he had told  Julius Malema that he would sing the "Thuma Mina" song only if the ...
Politics
2 years ago

“In a few months time, South Africans will go to the polls for the sixth time in our democracy to vote for national and provincial governments. This is an opportunity for our people to exercise their hard-won right to determine the direction of this country. I have engaged with the Independent Electoral Commission and also with the premiers of all provinces and intend to proclaim the 8th of May 2019 as the date of the election. We wish to remind all eligible South Africans who have not yet registered as voters that they still have until the proclamation of the election date to register.”

“We are a people of resilience, of determination and of optimism. Despite the worst excesses of apartheid, we did not descend into vengeance when our freedom was won. Our democracy has blossomed and flourished, nurtured by the goodwill of the men and women of this great land, who understand only too well at what cost it was attained. But the road towards true freedom is a long one and we have seen divisions in our society grow. Between black and white, rich and the poor, between rural and urban, between the sexes, and between language groups and cultures.

“At times it has seemed that the milk of human kindness that allowed us to reconcile in 1994 had gone sour. But we will not surrender to the forces of pessimism and defeatism. Our society is anchored in the roots of tolerance and co-existence, and we stand firm, resolute and united against all and everything that seeks to divide us or destroy our hard-won gains.”

“Above everything else, we must get our economy working again. I call upon every South African to make this cause your own. Because when we succeed – and of this we are certain – it is the entire nation that will benefit. As government, as business, as labour and as citizens, let us unite to embrace tomorrow. Let us grasp our collective future with both hands, in the immortal words of the Freedom Charter: side by side, sparing neither strength nor courage. This task, of building a better South Africa, is our collective task as a nation, as the people of South Africa.”

The 2019 State of the Nation Address was packed full of interesting moments. We bring you the top 6.