Sanef condemns Ndabeni-Abrahams for blocking media from doing its job 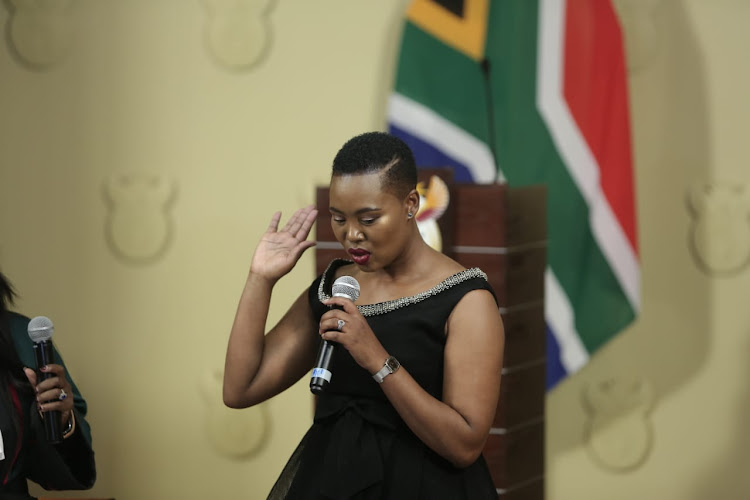 Sanef wants a meeting with communications minister Stella Ndabeni-Abrahams after she blocked SABC journalists from covering a protest at an ANC manifesto launch in the Eastern Cape.
Image: Alaister Russell/The Sunday Times

The South African National Editors Forum (Sanef) says it would like to have an urgent meeting with communications minister Stella Ndabeni-Abrahams over her blocking SABC journalists from doing their job.

Sanef condemned the minister's actions in blocking the journalists from covering a protest at an ANC manifesto launch in Mount Frere in the Eastern Cape on Saturday.

Irate supporters stormed the rally complaining about poor service delivery. Journalists from the SABC and other media were among those blocked.

Video footage which was also broadcast on TV stations showed Ndabeni-Abrahams blocking the journalists from covering the protest and ordering them to cover what they came for and not to give coverage to "people that are out of order".

The South African National Editors Forum (Sanef) says it has found no evidence of a R100,000 donation by Bosasa to a crowdfunding campaign for the ...
News
3 years ago

In a statement, Ndabeni-Abrahams said she would like to offer her sincere apologies for "an incident" with some members of the media.

"I wish to assure the media and South Africans at large my unreserved commitment to media freedom. I sincerely regret the incident," Ndabeni-Abrahams said.

The forum said while it noted the minister had apologised for the incident, it was concerned that she referred to her actions as an "altercation".

"Given the minister’s high profile portfolio relating in particular to the SABC, we would like to have an urgent meeting with her to discuss the matter and our concerns," Sanef said in a statement.

Sanef said it also saluted the SABC for airing the footage, showing fierce editorial independence and a shift from the recent past where freedom of expression was undermined at the public broadcaster.

The Democratic Alliance said Ndabeni-Abrahams’ actions were no different from previous ANC ministers who had sought to control the SABC through political interference.

"Her act is not a once off or a mistake, she was simply doing what the ANC has been doing for years, and were allowed to by captured SABC management and boards.

"We applaud the SABC for taking a firm stand and encourage it to report any attempts of persecution by the ANC for simply doing what is required of the SABC as an independent public broadcaster, not ANC mouthpiece," the DA said in a statement.

The South African National Editors’ Forum (Sanef) has lodged a complaint at the Equality Court against the EFF and its leader Julius Malema in a bid ...
Politics
3 years ago

It has been an eventful week as the EFF and the media struggle to find common ground.
News
3 years ago