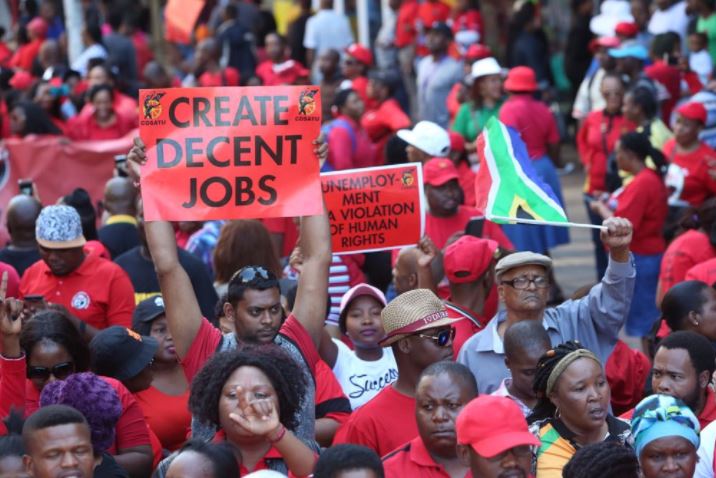 Cosatu is preparing for a nationwide strike on Wednesday to protest against job losses. File photo.
Image: Jackie Clausen

Cosatu in Gauteng has lamented what it terms "the resurfacing of the 1996 class project" in the ANC government - a project the trade union federation thought it had defeated at the ANC Polokwane conference in 2007.

The federation was addressing media at a briefing relating to the Cosatu national strike, scheduled for Wednesday, to protest against job losses.

The term "1996 class project" was coined by the SA Communist Party to describe former president Thabo Mbeki's administration, which the communists and Cosatu viewed as pushing for neo-liberal policies, such as the Growth, Employment and Redistribution (Gear) macro-economic policy.

Cosatu in Gauteng has cautioned the ANC to change its attitude towards the proposed reconfiguration of the tripartite alliance, saying failure to ...
Politics
2 years ago

Dakile said this was now accompanied by the re-emergence of a "hegemonic right-wing" faction within the ANC.

"As Cosatu Gauteng we can tell you from where we are that what we thought we had defeated in Polokwane, which was affectionately known as the 1996 class project, has resurfaced and is turning its ugly head," said Dakile.

"You can see for example the role that is being played by Trevor Manuel of late ... Trevor Manuel was a serious soldier of the 1996 class project. Trevor Manuel has been one of the chief architects of the National Development Plan that we rejected, so you can see that emerging trend. The appointment of Tito Mboweni as minister of finance is part of that."

Dakile said the proposed unbundling of Eskom into three separate entities - generation, transmission and distribution - under Eskom Holdings was "the work of the 1996 class project".

To this end, Cosatu in Gauteng was rejecting a proposed move that he said was meant to start the process of privatising Eskom.

Cosatu will on Wednesday be organising a national strike in all provinces, the central message of which will be the fight against job losses.

Dakile said the strike was only the beginning of a bigger fight that Cosatu would mount against what he called "worrying tendencies that are anti-progressive" by the ANC government, such as the increase of VAT.

"You can be able to see and detect that the right-wing of the ANC is at the hegemony and it is pulling the strings, whether we like it or not. The question is, in whose interest?" said Dakile.

"Over the past 25 years, what we have seen is growth that benefits business and capital at the expense of workers. Is the alliance that we are in helping and assisting us, or is it assisting our principal enemy? These are questions that the federations must engage with."

The Cosatu march in Gauteng on Wednesday is expected to start at Mary Fitzgerald Square in Newtown and proceed to the Gauteng Legislature to deliver a memorandum of demands to Gauteng premier David Makhura and business leaders.

The ANC's alliance partners in the Western Cape want the party to ensure their leaders feature prominently in its lists of candidates that will be ...
Politics
3 years ago

Cosatu to march against e-toll 'bullying' by Tito Mboweni

The Congress of South African Trade Unions has called on its members to rally behind a protest against e-tolls in Pretoria on Friday.
News
3 years ago