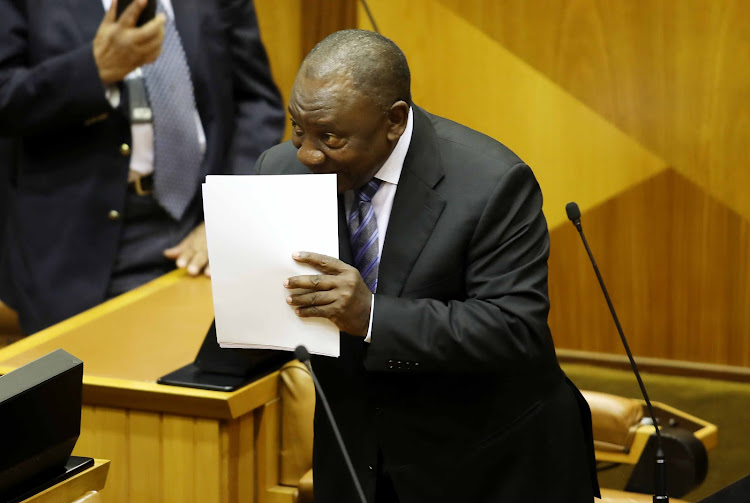 President Cyril Ramaphosa came under pressure in parliament on Tuesday to act against some of the ministers accused of corruption at the state capture inquiry.

DA MP Phumzile van Damme took the opportunity during the Sona debate to challenge Ramaphosa to prove his commitment to fighting corruption by suspending implicated ministers, including Gwede Mantashe and Nomvula Mokonyane.

EFF leader Julius Malema made a similar challenge to Ramaphosa when he addressed the house.

Mantashe and Mokonyane, along with deputy correctional services minister Thabang Makwetla and ANC MP Vincent Smith, are alleged to have received financial and other benefits from controversial government service provider Bosasa.

The company, renamed African Global Operations, is said to have received irregular tenders worth billions of rands.

The allegations against these individuals - and numerous others - at the Zondo commission surfaced during damning testimonies by high-ranking former Bosasa staffers.

"If not, you will remain the president who had no backbone and continued turning a blind eye to corruption by those in his party - no different to your predecessor, Mr Jacob Zuma," she said.

"It is this very culture that is ruining our country - the notion that one must protect members of their parties at all costs, even when implicated in wrongdoing."

Defending the ANC, deputy justice minister John Jeffery turned the tables on the DA, saying it was a party led by a "strawman" in Mmusi Maimane, who was incapable of reigning in Western Cape premier Helen Zille.

He accused the DA under Maimane of making proposals that showed a poor understanding of the constitution. "I think former DA federal chairperson Wilmot James said it best when he said, and I quote, 'I don't think Mr Maimane understands the constitution at all,'" said Jeffery.

"I trust that you can therefore expect the honourable Maimane to ensure that Helen Zille appears before the commission, given that the DA accepted donations worth R300,000 from the Gupta family," he said.

Jeffery said at least the ANC was taking action. "The difference between the ANC and DA is this: we're doing something about corruption, while they're just making promises. While the hollow man must talk, the other man is in the arena," he charged.

"While others may follow the hollow man and may fall for the masquerading of the scarecrow, we trust that the majority of people of our country will continue to have faith in President Cyril Ramaphosa, the man in the arena, and the ANC, the party that put him there."

President Cyril Ramaphosa’s state of the nation address (Sona) largely dealt with the issues facing SA, but it promised more than government can ...
Politics
3 years ago

Twitter urges Maimane to 'deal with Zille' after opposing her #TaxRevolt

DA leader Mmusi Maimane took to Twitter to say he does not support the tax revolt proposed by former leader Helen Zille - drawing strong criticism in ...
News
3 years ago

ANC suddenly decides land issue is urgent, must be tackled before elections

ANC chief whip Jackson Mthembu has made an about-turn by announcing on Tuesday that parliament will begin the process of amending the constitution in ...
Politics
3 years ago