ANC MPs not keen to listen to McBride over contract renewal 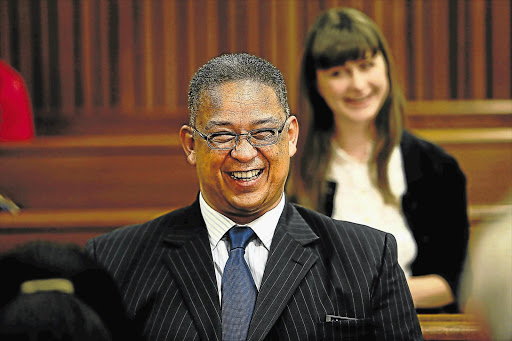 ANC MPs are not keen to hear Independent Police Investigative Directorate (Ipid) boss Robert McBride, who is at loggerheads with police minister Bheki Cele over the renewal of his employment contract which comes to an end next Thursday.

The oversight committee to which both Cele and McBride account is now seeking legal advice on whether it could come to a conclusion over the stand-off without admitting oral submissions.

It is unusual for a parliamentary committee not to take oral submissions but this would also be a slap in the face for McBride, who expressly stated in his written submission that the committee could not and should not come to its conclusions without giving him an oral hearing.

But ANC MP Leonard Ramatlakane, citing time constraints, proposed that the committee should not call for any oral submissions. The committee has a deadline of February 28 to report to the North Gauteng high court and Ramatlakane said they would never meet it if they listen to oral hearings.

"We are not going to have an oral presentation as requested here, we will consider what is written on paper presented before us," said Ramatlakane. He said it was provided in the rules for a committee to make its own arrangements.

In his written submission, McBride wrote: "I have consistently maintained that in the current circumstances my right to be heard includes a right to be given an oral hearing."

McBride vs Cele: Ipid’s probe into a probe fans the flames

Elements within the police’s elite political killings task team now find themselves in the crosshairs of the Independent Police Investigative ...
Politics
2 years ago

McBride claims that Cele's determination not to renew his appointment is based on political considerations. He said if the parliamentary committee were to confirm Cele's recommendation, and his contract is not renewed, there is an undoubtedly risk that several high-profile and politically sensitive investigations would be impeded or obstructed.

McBride further stated that if he left his position, Cele may appoint someone that is sympathetic to his own political interests and that of his allies. "Even if this were not the case, there is no guarantee that the new appointee would have the institutional knowledge, determination and frankly, the courage, to persist in these investigations," he wrote.

"These are real risks that I urge the committee to take into consideration," he added.

"What harm would it cause to call people in? What if you got specific questions for the person?" asked IFP MP Mzamo Buthelezi.

The DA's Zakhele Mbhele warned that the proposal was "not going to fly", describing oral interaction as a key mechanism in the nature of parliamentary oversight.

It would be 'irrational' to reappoint McBride as Ipid boss: Cele

"We said we are not going to pre-empt the outcome. We are going to cross bridges when we get to them and we are going to give ourselves space and time to be substantive and comprehensive. Now there is a proposal for a very clear and concrete exclusion of a means to conduct that process. There is a contradiction there," said Mbhele while his DA colleague Dianne Kohler Barnard warned that any misstep, however minute, will end up in court.

ANC MPs were adamant that oral submissions would delay the process but that legal advice would be sought over the weekend on how to proceed.

Among documents that MPs want to study to help reach a conclusion on the matter are copies of McBride's application letters for the positions of national commissioner of police, head of the directorate for priority crime investigation and head of crime intelligence.

They also want an update on his security clearance and outcomes of annual performance assessments since he took office in 2014.

Parliament’s police oversight committee has given police minister Bheki Cele until the end of Monday to give reasons for his statement that police ...
Politics
2 years ago

Independent Police Investigative Directorate (Ipid) boss Robert McBride's testimony before the state capture inquiry has been postponed to allow for ...
Politics
2 years ago