SACP not backing ANC for seats on the gravy train, says Blade Nzimande 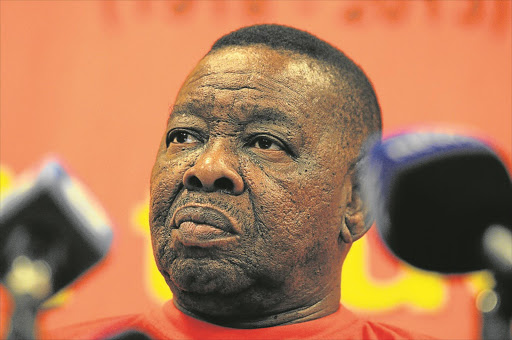 The SACP is in bed with the ANC ahead of the upcoming elections but not because the party expects deployment in government for its leaders.

That's according to SACP general-secretary Blade Nzimande who was briefing the media in Braamfontein on Sunday after a weekend-long central committee meeting of the reds.

Nzimande said the party would be campaigning for the ANC, having embraced its manifesto, but added that this should happen within a reconfigured alliance wherein the SACP and Cosatu had a say equal to that of the ANC on big issues.

He said it was high time the manner in which the alliance functioned became that of equal partners instead of the ANC acting like a big brother in the running of government.

This has been viewed by some as a strategy by the SACP to secure its place at the table for cabinet positions, post the elections.

As Nzimande, who is also minister of transport in the ANC-led government, delivered the briefing he was flanked by two other communist party leaders who are ministers.

Senzeni Zokwana is the party's national chair and minister of agriculture, forestry and fisheries and his deputy, Thulas Nxesi, also doubles up as the minister of public works.

Nzimande said they were demanding better treatment from the ANC but this was not for the personal enrichment of communist leaders.

"Since our formation as the SACP in 1921 we have been in the struggle and in every terrain, whether building trade unions, in the armed struggle, in rebuilding this country and we did not expect anything in return," said Nzimande.

"We are not in this because we are seeking personal positions as leaders of the SACP. Were that the case, we would not have had communists who sacrificed their lives for a better South Africa.

But he added that if given responsibility, such as a ministerial position, the party would "honour that deployment with all that we have".

Among other issues the central committee deliberated on was the beleaguered Eskom.

Nzimande said the party was aware of people who were banking on the splitting up of the power utility.

"We are aware that there are elements who think that restructuring of Eskom means then Eskom is going to become a haven for profit making at the expense of our people so we need to emphasise our stance against privatisation because of that," said Nzimande.

The South African Communist Party (SACP) has laid the blame for the ongoing crisis at Eskom on what they term the "corruption of corporate capture of ...
Politics
3 years ago

Cosatu in Gauteng has cautioned the ANC to change its attitude towards the proposed reconfiguration of the tripartite alliance, saying failure to ...
Politics
3 years ago

SACP condemns intimidation of and threats against journalists

The South African Communist Party says it unequivocally condemns “intimidation, trolling or online harassment of journalists, including on but not ...
Politics
3 years ago