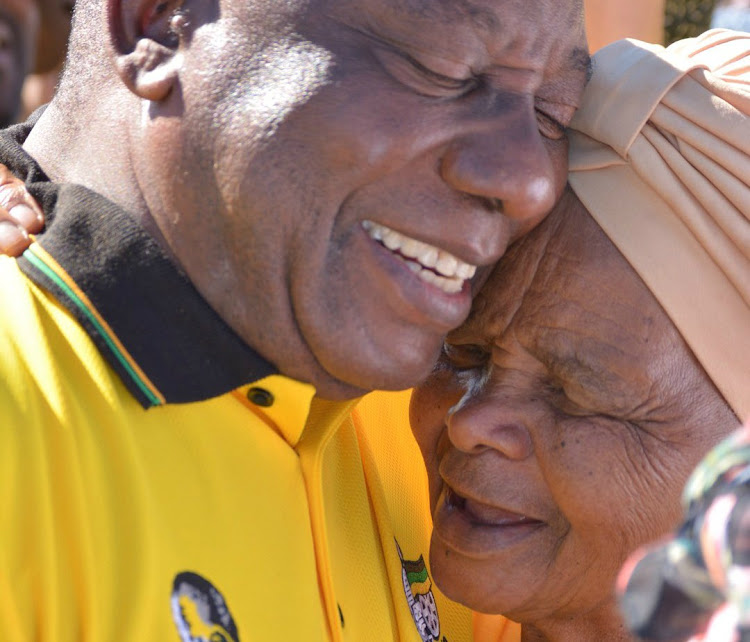 Cyril Ramaphosa embraces a woman during a door-to-door campaign in Vosloorus in Ekurhuleni on Tuesday February 26.
Image: @MYANC via Twitter

President Cyril Ramaphosa told the community of Vosloorus on the East Rand that he will make sure that people who have stolen money go to jail.

Ramaphosa addressed hundreds of supporters and community members during his visit to the area to encourage them to cast their vote in favour of the ANC in the upcoming May 8 general elections.

“We are saying the crooks who steal money should go to jail. They must wear the orange overall [for prisoners],” the president told supporters.

It's official: South Africans will go to the polls on May 8

President Cyril Ramaphosa has officially proclaimed May 8 as the date for the national and provincial elections.
News
3 years ago

Ramaphosa also used the occasion to preach unity in the ANC, so that the party could secure a positive electoral outcome.

Speaking to the media on the sidelines of his visit to the area, Ramaphosa said the party was working hard to close the gaps of factionalism and was on track to resolve its problems.

The ANC in Ekhuruleni was a loud opponent of Ramaphosa in the run-up to the ANC’s 2017 Nasrec conference, but there were no signs of a divide during the door-to-door campaign as Ramaphosa held hands with the ANC's Ekurhuleni chairperson Mzwandile Masina.

In October 2017, Masina famously said he would “never serve under Cyril”.

ANC members and leaders who have been involved in “fostering divisions and conflict” in the party will not be included for the national assembly and ...
Politics
3 years ago

Ramaphosa's visit to the area began in Ward 44 of the township, where he went into the homes of old women and listened to their problems.

In one home, Ramaphosa promised 61-year-old Johana Makhanya that the local government would assist in getting her grandchildren social grants. In another home, Ramaphosa met Elsie Buda and Christine Sibanyoni, two old ladies who committed to voting for the ANC.

In every home, Ramaphosa heard complaints about unemployment and poorly built homes.

“We are not sitting on our laurels. We are trying everything that we can at a government level, working with the private sector and obviously working with labour. We are working out schemes, plans and opportunities for creating jobs for our people,” he told the media.

During his interactions with residents, alongside mayor Masina and Premier David Makhura, Ramaphosa heard about a housing shortage in the area. Some people gathered to hear him speak displayed placards complaining about RDP houses being stolen and corrupt officials colluding to steal houses.

“We are embarking on a massive programme here in Ekurhuleni to build 10-storey housing settlement structures. In another area, 3,000 human settlements will be built,” he told the media and later repeated to residents.

Ramaphosa added that he was encouraged by the hope that people had in the ANC.

The ANC says anyone who attends its manifesto launch rally at the Moses Mabhida stadium on Saturday with “divisive” T-shirts will be guilty of ...
Politics
3 years ago

ANC Deputy President David Mabuza said on Wednesday that had party members only elected leaders from one faction at the December 2017 Nasrec ...
Politics
3 years ago

'Property you want to pay for' - Improved alternative to RDP housing

Gauteng’s new approach to housing will boost the property market in the province – particularly because it aims to meet people’s needs that go beyond ...
Politics
4 years ago