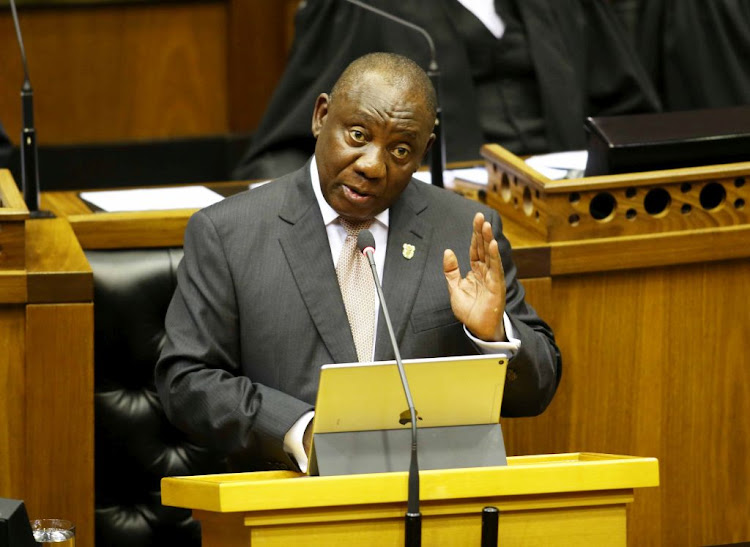 President Cyril Ramaphosa has declined to tell MPs how much his son Andile made from business dealings with controversial government service provider African Global Operations, previously known as Bosasa.

This comes after Ramaphosa was once again confronted with another Bosasa document by DA leader Mmusi Maimane related to his son Andile's dealings with Bosasa.

During a question and answer session in the national assembly on Thursday, Maimane wielded a copy of a contract between Bosasa and Andile that he had obtained through a PAIA application.

"The people of this country deserve to know the truth, they deserve to know what's being covered up here … how much did your son benefit from Bosasa which has had a generally corrupt relationship with your party?" asked Maimane.

Ramaphosa refused to disclose the figure, saying all information related to this issue had been presented to public protector Busisiwe Mkwhebane who was probing the matter.

Ramaphosa, following a similar confrontation with Maimane in 2018, told the house that Andile had received money from Bosasa for consultancy services.

He later changed his tune in a letter to National Assembly speaker Baleka Mbete, saying the R500,000 payment in question was actually a donation to his ANC presidential campaign, which he did not know at the time of responding to Maimane.

Turning to the issues at Eskom, Ramaphosa has been accused of having a conflict of interest stemming from the involvement of his immediate and extended families in the energy sector while he's championing the utility's turnaround.

He dismissed suggestions by EFF MP Hlengiwe Mkhaliphi that his involvement in plans to rescue Eskom from financial ruin, while his brother Douglas Ramaphosa and billionaire brother-in law Patrice Motsepe stood to benefit from multi-billion-rand renewable energy contracts,  amounted to a conflict of interests.

Renewable energy has been placed at the centre of solving Eskom's energy supply problems.

The president denied a conflict of interest, saying that until Mkhaliphi put the question, he had not been aware that Douglas Ramaphosa had interests in the renewable energy space.

Douglas Ramaphosa is a nonexecutive director of Powertech, a private sector electricity firm.

The president also said that he was not involved in the business affairs of Motsepe.

Ramaphosa also told MPs that Black Umbrellas, an enterprise development organisation he was involved in, had nothing to do with the renewable energy programme.

"There can be a conflict of interest if you can prove it … accusations of conflict of interest and corruption are so easy to make. People make them without any proof and we say, 'Where there's proof, bring it so that we can deal with it rather than just cast aspersions against everyone.'

"I want to disabuse us as leaders to stop casting aspersions unless we've got proof."

President Cyril Ramaphosa addressed parliament on a host of issues on March 7 2019. While opening the session, Ramaphosa joked with comedian Trevor Noah who was present in the audience.

Eskom losses not due to independent power producers: Jeff Radebe

The assertion that Eskom incurs losses as a result of its IPP programme is misleading and false, energy minister Jeff Radebe has said.
Politics
2 years ago

Mining magnate Patrice Motsepe has denied that his renewable energy business has benefited from his relationship with his brothers-in-law - President ...
Politics
2 years ago

Five South Africans have made it onto the list of 20 of Africa's billionaires as of February 2019, according to Forbes.
News
2 years ago