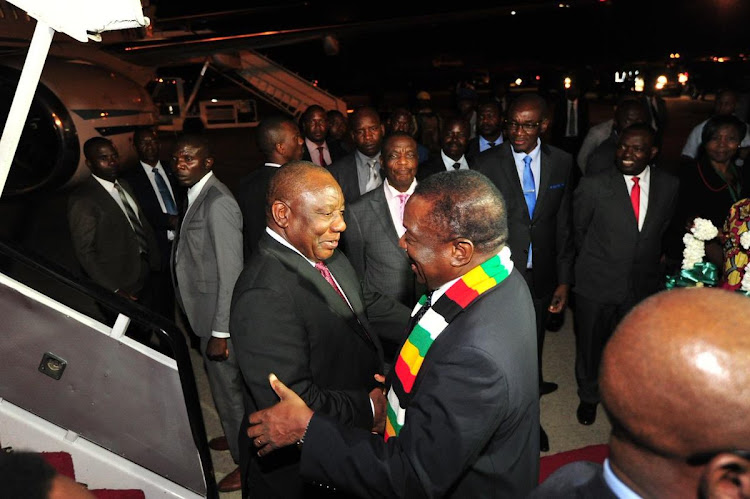 President Cyril Ramaphosa reiterated his calls for the lifting of sanctions against Zimbabwe at the opening of the third session of the bi-national commission between SA and Zimbabwe in Harare on Tuesday.

He called the sanctions "unfair and unjustified".

Ramaphosa is in Harare for the bi-national commission along with several ministers. They include international relations minister Lindiwe Sisulu, finance minister Tito Mboweni, trade minister Rob Davies and state security minister Siyabonga Cwele, among other government and business officials.

"SA has made a clarion call to the international community to lift the unfair and unjustified sanctions imposed on Zimbabwe. We made this position clear at the World Economic Forum in Davos and recently at the European Union. We are pleased that the EU has lifted sanctions on some members of your government. We want more than just that, we want to see real support for Zimbabwe," said Ramaphosa.

Cyril Ramaphosa can expect pleas for a bailout from Zimbabwe

The begging bowl will be out when South African President Cyril Ramaphosa arrives in Harare on Tuesday for the annual meeting of the SA-Zimbabwe ...
News
2 years ago

He said that Zimbabwe needed all the support it could get from the international community so it could emerge from economic meltdown.

The US last week extended sanctions on top officials and several companies in Zimbabwe. There are 84 people, including Mnangagwa and 56 entities, on the US sanctions list.

All eyes, however, are on the outcome of the bi-national commission which ends today, and whether there will be any financial package extended to Zimbabwe by SA.

Ramaphosa told the delegates at the commission that SA "stands ready to support Zimbabwe, within our means". Mnangagwa in his remarks said his administration would "not achieve much alone, without the help of friends such as SA".

"Your outspoken support for the new Zimbabwe is not taken for granted, you have stood with us regionally and internationally. We appreciate your support and call for the unconditional removal of sanctions," said Mnangagwa.

The bi-national commission was first signed in April 2015 and there are 45 agreements between the two countries.

Zimbabwe - described as one of South Africa's top trading partners on the continent - will host a meeting between presidents Cyril Ramaphosa and ...
Politics
2 years ago

Zimbabwe's average annual inflation should fall to between 10 and 15 percent after it reached its highest level in a decade in January, central bank ...
News
2 years ago

Zimbabwe will scrap a law that denies foreign platinum mining companies control of their operations in the country, the mines minister said on ...
News
2 years ago