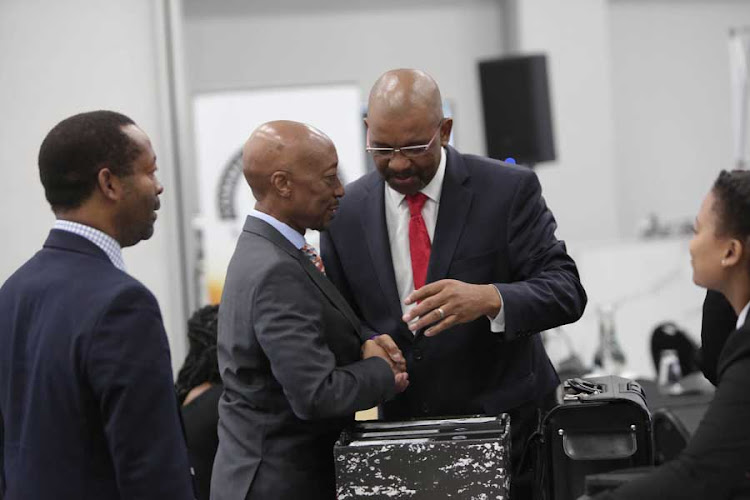 Lawyers representing public enterprises minister Pravin Gordhan at the state capture inquiry have argued that time and money should not be wasted on "consoling" axed SA Revenue Service (Sars) boss Tom Moyane's feelings by allowing him to cross-examine the minister.

In a legal to-and-fro between Moyane and Gordhan at the inquiry on Wednesday, Gordhan's lawyer Michelle le Roux argued that issues canvassed in Moyane's application to cross-examine her client had already been dealt with by retired judge Robert Nugent in his investigation into tax and governance issues at the revenue collector.

"If we understand Moyane's application ... all of that falls into three categories. The first are Sars-related issues. He wants to resuscitate the so-called rogue unit narrative. All of these Sars-related issues are the work of the completed Nugent commission … What this application amounts to is that you are being asked to review Nugent," Le Roux said.

"You are being asked to traverse the identical terrain. All of the Sars-related issues were the work of Nugent's commission and if Moyane is unhappy with that he has recourse.

"In another category of issues that could, at best, be described as personality issues, he (Moyane) talks about racism, acrimony, hate and grudges … Time and money should not be spent on consoling Moyane's feelings."

Arguing for cross-examination to be granted, Mpofu spoke of Gordhan's role in establishing the controversial high-risk investigations unit, dubbed the "rogue unit", which Nugent found to be a legal body.

Mpofu also alleged that Gordhan was racist towards Moyane and referred to a phone call in which Gordhan allegedly told Moyane to "grow up". Mpofu argued that this amounts to racism, because it implies that Moyane is a "boy".

The issue Zondo took with Moyane's application was that it may not respond directly to issues or allegations set out in Gordhan's testimony.

"What I was looking for is the issue of the grounds. My understanding of the rules is when you apply for leave to cross-examine, you must make it clear what parts of the witness's evidence you dispute and you must say what your version is in reference to those parts," Zondo said.

Backlash as Pravin Gordhan fights Tom Moyane's bid to cross-examine him at the Zondo commission.
Politics
2 years ago

"It's to enable me to see the gap between the version of the witness and the implicated person, how much area is disputed between the two statements."

Stating his case, Mpofu said one of the best known ways to test evidence was to do a cross-examination.

"The safeguard against cross-examination that strays across the rules is not to have a wholesale ban on cross-examination; but it is simply to rely on the wisdom of the chair that he will, when the time comes, safeguard the proceedings … When we put the themes [for cross-examination], in respect of each we then put the grounds broadly of our disagreement," Mpofu said.

"Our take is, given the broad mandate of this commission, if Gordhan as Moyane suggests, if Gordhan was involved in unlawful activity around the rogue unit issue that comes directly to the remit of this commission. State capture really talks about the creation of a parallel state outside of the parametres we all know. There is no difference between that and setting up a rogue unit."

He said Gordhan's affidavit was "more significant for what it omits than what it says".

"The things that he implicates Moyane in, most of them amount to criminal activity and if that is the case then at the highest level, the only way Moyane can defend his integrity against such accusations can only be done in cross-examination," Mpofu argued.

Zondo will give his judgment on the matter in due course.

According to the Spectator Index, being a newspaper reporter is the sixth most stressful job in the world. Topping the list of those with stressful ...
Opinion & Analysis
2 years ago

The ANC on Thursday apologised to public enterprise minister Pravin Gordhan and the party’s head of organising and NEC member Senzo Mchunu after ...
Politics
2 years ago