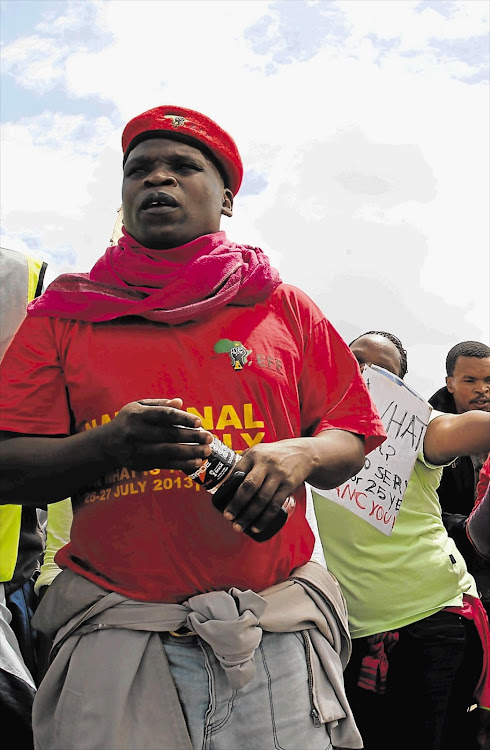 Themba Wele has joined the ATM as he believes the EFF and the ANC are "not in it for the total emancipation of black people".
Image: Michael Pinyana/Daily Dispatch

Wele in 2016 rejoined the ANC following a fallout with the EFF top brass over constituency money that Wele alleged was being misused at the EFF head office.

The fallout with EFF national leadership had led to Wele being expelled from the red berets and he thus lost his membership of the Eastern Cape legislature.

During his troubles with the EFF, Wele at some point was drawing his R85‚000 monthly salary despite sitting at home for the whole year.

Talking to TimeLIVE, Wele confirmed that he had since joined the ATM as he believed the EFF and the ANC were "not in it for the total emancipation of black people".

Wele launched an attack of his former political homes - the ANC and EFF - saying their time was up and that he believed the ATM was better positioned to govern.

He will be officially be unveiled as an ATM member on Friday.

Said Wele: "What is needed is a people-centred movement and I can safely say that the ATM is the only organisation among the current lot that talks about people on the ground and is led by such people, and as a young person I have a contribution to make in this regard.

'Jimmy' Manyi wants to 'reconcile with people of the Western Cape'

Nine weeks before the elections, two developments point towards the arrival of silly season in politics.
Politics
3 years ago

"As for the EFF, you know what happened to them regarding the constituency money that was redirected away from the people and misused and I objected to such from the onset which led to the fallout. But I have no regrets because I sacrificed to be with the people.

"The ANC case is worse, they have long abandoned the poor which are mainly black people which they only visit for votes towards elections like they are doing now."

Wele said he was confident that in the ATM he had found a principled political home that is in line with his own political beliefs.

"The contest in upcoming elections will be between the ANC and ATM if you read politics well, particularly in the Eastern Cape whose voters are woke. They will not be fooled by the ANC corruption this time around which does not benefit them," said Wele.

Phumzile van Damme and her fierceness are a whole mood.
Politics
3 years ago

Former government spokesman Mzwanele Manyi says there is no reason "objectively and on merit" for Icasa to "deny" his company a free-to-air TV ...
Politics
3 years ago