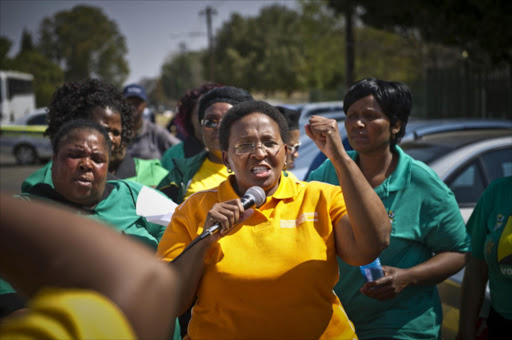 MEC for arts and culture Faith Mazibuko is number five on the ANC's list of candidates for the provincial legislature.
Image: Gallo Images / Foto24 / Nelius Rademan

Despite facing sanctions over her tirade against senior government officials, Gauteng MEC for arts and culture Faith Mazibuko has been nominated to represent the ANC in the Gauteng legislature.

Mazibuko is number five on the list, guaranteeing her a seat as an MPL after the elections.

This comes after Gauteng premier David Makhura chastised Mazibuko for her conduct, saying it was racist and sexist.

A leaked recording of the controversial meeting, initially reported on by AmaBhungane, revealed it was about the delivery of sports facilities known as "combi courts".

Gauteng premier David Makhura was on Friday expected to meet with MEC for sports, arts, culture and recreation Faith Mazibuko as well as her HoD and ...
Politics
3 years ago

In the audio, Mazibuko's CFO and HoD tried to explain why the facilities could not be delivered ahead of the May 8 elections but she refused to accept their reasons, saying they should pull out all the stops to ensure it was done.

She lashed out, saying a reason why other departments chose not to employ Indian and white people was because they liked to speak English.

Mazibuko is expected to be hauled before the ANC’s integrity committee to answer for her behaviour. She has since publicly apologised.

Former fees must fall activist Fasiha Hassan has featured on the list of candidates for the provincial legislature.

Gauteng MEC Faith Mazibuko trended on Twitter on Thursday after her 'combi courts' audio recording was leaked.
News
3 years ago

Gauteng MEC Faith Mazibuko has divided the online community as Tweeps debate whether or not she is racist.
News
3 years ago

Gauteng sports, arts, culture and recreation MEC Faith Mazibuko has issued a public apology to her head of department and chief financial officer ...
Politics
3 years ago