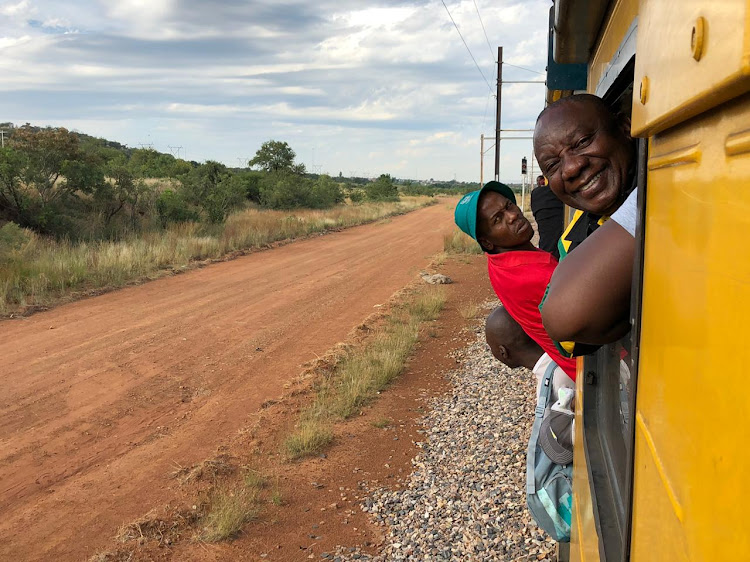 President Cyril Ramaphosa on the train from Mabopane, north of Pretoria, to Pretoria station on Monday morning.
Image: Twitter/ANCJHB

"It’s no longer a fable; it’s the lived reality of our people - and we are going to take steps to change the situation, because our people deserve the best."

That is what President Cyril Ramaphosa promised on Monday during his journey on a train from Mabopane to Pretoria.

"I’m rather glad that I came. I’ve seen for myself," Ramaphosa told eNCA.

The president, along with Gauteng premier David Makhura and ANC elections head Fikile Mbalula, boarded the train around 7.30am from Mabopane - but it was delayed by two hours.

En route the train got stuck again. Some commuters disembarked in frustration.

The delays meant Ramaphosa was late for his meeting with the ruling party’s top six.

The president eventually arrived at Pretoria station around 10.45am.

"Levels of frustration are quite high, but the people are surprisingly patient - patient because they are hoping that the ANC will see what’s happening and bring about changes," said Ramaphosa.

And president @CyrilRamaphosa arrives at the PTA station, 3 hours later after being stuck in a train from Mabopane this morning. #SABCNews pic.twitter.com/2jjGBVUl2B

The year is 2025 and President Cyril Ramaphosa is still stuck in the train from Mabopane pic.twitter.com/ObRCkJ6Dlk

If you want a metaphor for the country right now - the President @CyrilRamaphosa is stuck on a train somewhere around Mabopane. The train was late and now it's stuck. And the President is stuck. https://t.co/UkPzd3iEex

ANC President Comrade @CyrilRamaphosa interacts one on one with commuters at Mabopane train station to Pretoria #GrowSouthAfrica #ThumaMina pic.twitter.com/6cBct2bOnw

Post about daily commute on public transport will stir your heart

A Facebook post about difficulties using public transport to get to work has gone viral.
News
3 years ago

MPs get a taste of pain endured by train commuters

Members of Parliament experienced first-hand on Friday the broken windows‚ delays and fear of crime that haunt commuters daily aboard trains in Cape ...
Politics
4 years ago

A mob of agitated commuters commandeered an entire passenger train in Durban on Wednesday night – forcing the driver to change his route.
News
4 years ago

Eight senior executives at Transnet, who have been implicated in forensic reports dating as far back as 2011, have been issued precautionary ...
Business Times
3 years ago

Chair Popo Molefe has confirmed that papers have been served on those responsible for corrupt dealings and malfeasance at the SOE.
Business Times
3 years ago