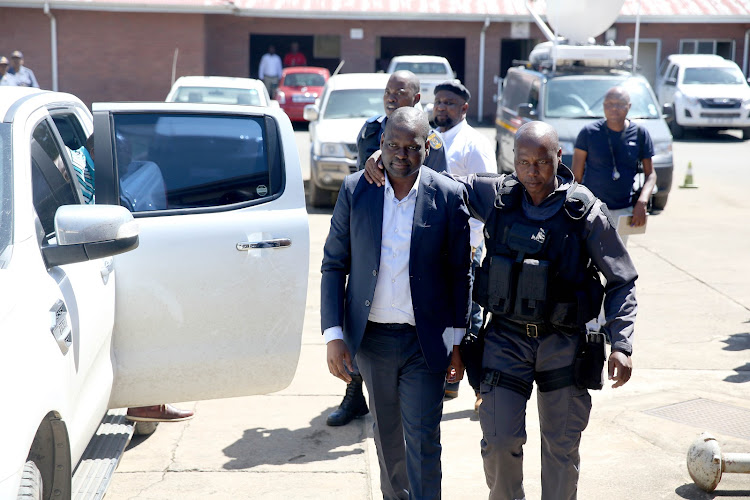 The mayor of the Harry Gwala municipality in KwaZulu-Natal, Mluleki Ndobe, will remain in police custody until his bail application.

Ndobe, 41, appeared in the Umzimkhulu Magistrate's Court together with his co-accused, Sbonelo Myeza, 39, Mbulelo Mpofana, 34, and Zweliphansi Skhosana, 48, on Tuesday for the 2017 murder of ANC Youth League leader Sindiso Magaqa. The matter was remanded to March 25 and 26 for formal bail application.

The state confirmed that all four accused are facing one count of murder, alleging that they had acted in "common purpose" in having premeditated the murder of Magaqa.

They also face two counts of attempted murder. According to the charge sheet, the second and third counts relate to the attempted murder of Jabulile Msiya and Nontsikelelo Mafa on July 13 2017 - the same day Magaqa was gunned down.

During court proceedings, Ndobe's attorney Larry Seethal asked that the state inform the court whether more arrests were imminent as this would cause further delays in the bail application for his client.

"There are outstanding suspects in the case, but I cannot comment on whether SAPS will make more arrests before Monday," she said.

The accused were unfazed when magistrate Riaz Essack ruled that they will be detained in police custody until a formal bail application.

After the court proceedings, ANC KZN spokesperson Nomagugu Simelane-Zulu said the party could not hide the fact that it was quite embarrassing that one of its senior officials had been implicated in such serious allegations.

"We do want to indicate that we have a standing as the provincial executive committee and the ANC general that we always stand with victims in whatever case there is," said Simelane-Zulu.

#MlulekiNdobe leaving the Umzimkhulu Magistrates Court after the case against him and his 3 co accused was remanded to March 25 & 26 for formal bail application. #SindisoMagaqa @TimesLIVE pic.twitter.com/PMsq8Hw1NQ

"Having said that, the fact that someone has been accused of something doesn't necessarily mean that the person is actually guilty of a crime and we are making a request that the people who have been brought to court today are given an opportunity to clear their name because that is what the process is about and we don't preempt the process."

"The constitution of the ANC says you are removed from any position or any deployment of the ANC when you have been convicted of a particular crime. I must say that we do not have protocol as a province on how to deal with such matters because we have not been faced with this situation before, when one of our senior leaders has been charged on such a matter," she said.

"The leadership of the ANC in the province is going to have to sit down and deliberate and then guide us on how to move forward and we do request that comrades allow the leadership that space to engage and engage freely."

When probed about where Ndobe and his co-accused would be detained until their next court appearance, police minister Bheki Cele's spokesperson Reneilwe Serero told TimesLIVE that she was "not at liberty to disclose the location of detention".

Ndobe left the court in a vehicle driven by a policeman.

Twitter is pleased with the arrest of an ANC official in connection to Sindiso Magaqa's murder.
News
2 years ago