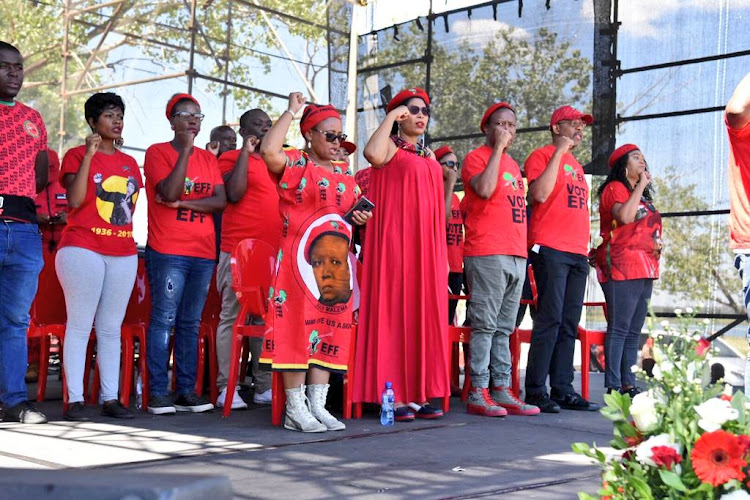 EFF leader Julius Malema on Thursday claimed that the red berets were deserving of a bigger mandate from voters in the May 8 general elections for having delivered on their previous election promises.

Malema said the Economic Freedom Fighters had promised that it would remove former president Jacob Zuma from the Union Buildings, which he says they did. Zuma was recalled by the governing ANC early last year, more than a year before the official end of his term of office.

Malema said they had in 2014 promised that they would see to it that expropriation of land without compensation happened. He said the country was now closer to realising that, after the EFF motion in parliament to amend section 25 was passed after the ANC voted with the EFF.

Malema also said the nationalisation of the SA Reserve Bank was being processed thanks to the EFF, and the Guptas had left the country because "we promised to fight corruption".

EFF leader Julius Malema will be addressing scores of EFF supporters for the commemoration of Human Rights day at Dlomo Dam in ...
Politics
2 years ago

He went on to make more promises.

"We will take down e-tolls in Gauteng, we will end informal settlements, we will protect and promote the rights of gays, lesbians and women," said Malema.

The self-styled commander in chief also launched an attack on "this nonsense of non-racialism".

Malema was addressing party supporters near the Dlomo Dam in Sharpeville in commemoration of the 1960 massacre. Malema said he did not refer to this day as Human Rights Day, as it was currently known, because he and the EFF were not in the business of fighting for white people who "always had rights".

Said Malema: "This nonsense that they are spreading in defence of white privilege, we are not part of that nonsense. What Human Rights Day today, is, is the day for the rights of black people.

"We are here to fight for the rights of black people, we must call it by its rightful name, they call it Human Rights Day to distort history.

"Human Rights Day for what, for who, where? They must relax, this is our day. It's Sharpeville Day - about a day when black people were killed by white people for fighting for the rights of black people.

"They killed us and they want to celebrate with us by calling it Human Rights Day to appease murderers.

Malema said he was telling the truth for future generations, "not to return the land to the hands of the oppressor", and he was willing to lose votes for this if need be.

"Let us lose elections on principles and telling the truth. If white people do not want the truth, that is their business," said Malema.

Economic Freedom Fighters leader Julius Malema on Thursday told EFF supporters in Sharpeville that South Africa would be a better place had former ...
Politics
2 years ago

Illegal land grabs could intensify ahead of elections, warn police

The SA Police Service (SAPS) says the debate on expropriation of land without compensation has led to an increase in incidents of illegal occupation ...
Politics
2 years ago