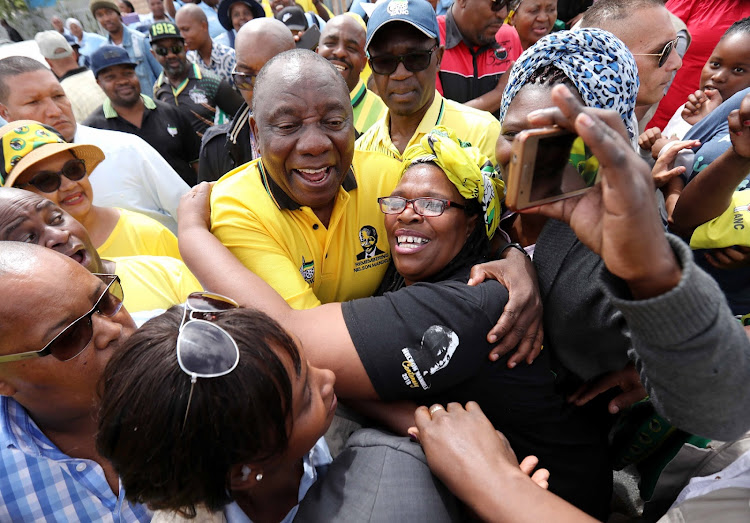 ANC President Cyril Ramaphosa with ministers of his cabinet including the leadership of the Western Cape went door-to-door as they meet ANC supporters on their election campaign trail in Delft and Mfuleni on March 22 2019.
Image: ESA ALEXANDER/SUNDAY TIMES

ANC President Cyril Ramaphosa says he's "not worried" that rolling power outages by Eskom will cost the party votes ahead of the May 8 elections.

Speaking to reporters while on the election campaign trail in Delft on the Cape Flats, Ramaphosa said he was confident that electricity supply would have stabilised by the time the country holds its sixth democratic elections in less than two months.

"No, I am not worried, because South Africans are being given full information. We are being transparent and the challenges that Eskom faces emanated from our recent past. Many people are aware of the wrong things that were done in the past," he said.

The electoral commission has had to activate an expensive contingency plan to ensure voting stations have electricity on voting day due to ...
Politics
3 years ago

He added: "While we are able to put the truth to the people of South Africa, they will decide, they will make their own choice. What I'm worried about is that we should be able to have a free and fair election.

"I am hoping that by the time the elections come this load-shedding that's debilitating will have been addressed, that the grid will have stabilised, because we want an election process that will not be weakened or interrupted or interfered [with] by load-shedding.

"I am saying to the whole nation: let's not panic. Let's join hands, close ranks to work together. This is a common problem for all of us.

"Wherever we go people are raising this issue and that is why we are addressing it on an urgent basis," he said.

Ramaphosa said his government and Eskom would soon be meeting with the Electoral Commission of SA to put into place contingency measure to mitigate the possible effect of load-shedding on the elections.

Touting for votes in a township that is a DA stronghold, Ramaphosa lashed out at the Western Cape provincial government for failing to spend R1.7bn of its national allowance on housing despite there being a housing shortage in the province.

"The saddest part is that the province has returned R1.7bn to the treasury for housing projects, where money was not spent. That for me is very tragic that a structure of government should return money to Treasury having not spent.

"And I take a very dim view of any structure of government that returns money having not spent the money and I'm going to make sure that in the new administration we take steps against structures of government that do this thing because it's a terrible thing to do against the people of our country," he said.

Ramaphosa is spending Friday and Saturday in the Western Cape to woo voters to support the ANC, in the only province it currently does not govern.

Residents of Delft have complained about a lack of jobs and houses, load-shedding and  crime.

President Cyril Ramaphosa has been criticised for comparing the current nationwide power cuts to apartheid.
Politics
3 years ago

President Cyril Ramaphosa has proclaimed the so called “new Scorpions” - a new Investigating Directorate to be based at the office of the National ...
Politics
3 years ago

Will Ramaphosa and his team come up with a plan to curb corruption?

As national elections loom, RW Johnson examines the state of the nation with pinpoint accuracy
Books
3 years ago